Aion—the Open Application Network based digital assets are mostly used to secure and access the OAN. The OAN has its benefit of being built on open standards, and in this regard, it is owned by everyone that uses it.

Moreover, the coin is mineable and is majorly used for payments, but the All-Time chart of AION/USD shows that the trend has turned completely flat for the past 22 months. However, the YTD movement shows a bearish crossover on the YTD chart due to the plummeting movement for the past 30 days.

At the time of penning down this article, AION was trading at $0.08125 after drawing an uptrend from the YTD lowest marked at $0.035. However, the uptrend could not reclaim the height that it hit at the onset of the year and resorted to a negative market bias in the previous month.

With a current bearish bias, the coin lacks support from 50- & 200-day MA and is already testing support around the lower Bollinger Bands. However, the bands laid do not show any trading extremities, but it lacks a complete positive sentiment. If the AION price regains the lost momentum, which seems impossible as per the current bearish trend, it should reclaim the lost YTD high on the daily chart.

The 24-hour movement confirms the bearish divergence on the MACD chart. The RSI of the AION coin is also inclined towards the major support area and is lying at 33.28.

Algorand (ALGO) Draws a Negative Bias After YTD High at $0.76 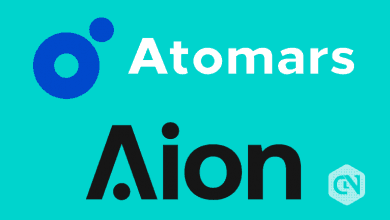 AION is Going to Be Listed on Atomars Exchange