Features such as Proof of Believability consensus verification, coherently distributed sharding, and a protocol called node-to-shard are the primary things helping IOST stand out from the other platforms based on blockchain technology.

Although blockchains are rapidly becoming a popular technology to rely on, there are still certain limitations attached to it. One such limitation is its inability to handle or process bulk loads during mass adoption scenario, which tends to reduce the system speed considerably. Ethereum is an amazing concept, but even that is not capable of handling huge loads the way giants, such as Google, do. IOS or Internet of Services is a kind of solution to the problem of scalability blockchain currently faces.

The roots of IOS Foundation goes to China. Its co-founders Justin Li, Terrence Wang, Jimmy Zhong, Sa Wang, Kelvin Tan, and Ray Xiao came up with IOS as a fresh way of running dApps. They have envisioned to create a more dynamic and flexible enterprise blockchain that today’s users require by utilizing Proof of Believability mechanism, micro state blocks, TransEpoch which is a node-to-shard protocol, and effective distributed sharding.

As of 24th January 2018, IOST tokens had recorded the highest price of 0.127085 dollars. Now let’s look at how the digital currency’s supply was allocated at the ICO event: 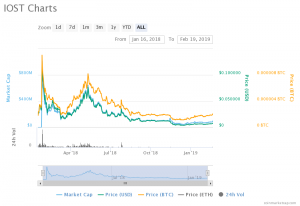 Anyone interested in trading the IOST tokens can do so through multiple cryptocurrency exchange platforms such as Kucoin, Huobi, Ethfinex, OKEx, and Binance. Bitcoin BTC, USDT, and Ethereum ETH are the most commonly used trading pairs with IOST.

At present, IOST is an ERC-20 token available on the blockchain platform of Ethereum since IOST mainnet is scheduled to release in 2019. All the wallets and exchanges that support the ERC-20 token can support IOST in a hassle-free way.

In addition to IOST, one can participate in the network of IOS through Servi. Servi can be generated by being actively involved in offering reviews and services. It can’t be traded for or exchanged on the network. Once you verify a block, the soulbound token is reset to 0, acting as a trust score. Still, you can check IOST price prediction by experts to get an idea about the future market of the coin.

For people who are unaware of computer programming, the concept of sharding can be difficult to understand. In simple terms, sharding refers to a database architecture concept which explains how tables in the database get divided for better performance. As each line is broken into its individual server, the size of index decreases considerably which in turn boosts the overall performance.

Sharding is quite complex as all the shards contain distinct data and information, similar to torrents. There is also a huge risk in dispensing information among varied nodes. If we look at Ethereum, each node of the network holds the complete blockchain which is not the case with IOST.

As it uses micro state blocks, every shard stores just the preceding blocks’ headers which significantly reduces the size. Further, it is also suggesting to distinguish between which shard is holding which blocks, thereby helping each node to process only a part of the whole network instead of bogging it down with loads of data.

The idea is great, but with respect to a comparatively small network, it runs a huge risk of defeat. While IOST somewhat solves the scalability problems of Ethereum, the fragmented technique seems to be compromising on security as well as stability.

Finding Its Foothold in the Market

Though IOST seems a concrete project as a whole, it is currently being perceived as another Ethereum competitor like NEO or EOS. If a blockchain isn’t scalable, interoperable, stable, and secured in line with the legacy system, then it might be dropped off completely. Internal approval for buy-ins can also stall the progress midway.

One of the biggest problems here is that instead of focusing on the niche market, the budding blockchains are busy pitching its hopes on a bigger audience. As a result, they seem to be at a loss while competing with established companies in the likes of IBM or Microsoft. IOST is competing with all these giants who are already providing enterprise blockchain solutions on their primary networks, platforms, as well as services.

IOST is hopeful of establishing itself as a marketplace. However, the market will only dictate its direction. Whether it succeeds to deliver its promises remains to be seen.

Now You Can Earn Dogecoin on a New MMORPG Game