Gas is a crypto token created on the NEO blockchain platform with a view of being fees for processing transactions on the NEO network. In simple terms, GAS is the internal pricing for running a transaction or contract in Ethereum. Its purpose is to decouple the unit of Ether (ETH) and its market value from the unit to measure computational use. Thus, a person who wants to mine can choose to decrease or increase the utility gas based on its needs.

The GAS system is as same as the use of Kw for measuring electricity for home use. The major difference from actual energy market is that the originator of the transaction sets the price of gas, to which the miners can or not accept, this causes the emergence of a market around GAS. 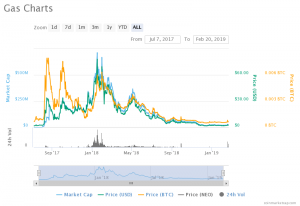 The GAS price per transaction is set up to deal with the Turing Complete nature of Ethereum and its EVM. IF the amount of Ether present in the account is less to perform the message or transaction, then it is held as invalid. The main goal is to stop the denial of service attacks from infinite loops to encourage efficiency in the code and to make an attacker pay for the resources they use.

This transformation may come as such result in the traditional economy, which is merging with the digital economy, making it easier for all the goods to be exchanged.

All social institutions, guidelines, and laws will be completely transparent and will act fairly, in the near future.

Presently, there are nearly 82 million GAS coins in existence. Each of the GAS coins has a value of about $2.16 per coin.

This is something that results in the market capitalization of $21,867,013. Also, the trading volume of the GAS has constantly been around $815,472 in the last 24 hours. Based on the complexity of the command that you wish to perform, the value of the GAS increases. Let’s say, for example, if A wants to send B 1 Ether unit then there would be a total cost of 1.00001 Ether to be paid by A. Some converse steps cost more than others as they are either computationally expensive or because they expand the amount of data that has to be saved in the state.

The limit of the GAS price is fixed at present to provide a stable launch of Ethereum. However, it will be allowed to free float as per the demand, and the amount of total gas per block will be increased gradually to encourage the stability of the Ethereum network.

Aelf Witnesses 9.2% Increase in Price in the Last 7 Days

Why is ARK a Viable Option for Investors?