Dogecoin is a blockchain based peer-to-peer cryptocurrency and an altcoin that was designed to reach a much broader demographic than bitcoin. Dogecoin was introduced in the market as joke currency which featured the likeness of Shiba Inu Dog from the ‘DOGE’ meme. The cryptocurrency that was fresh and fun, covering the shortcomings of Bitcoin and other cryptocurrencies gained its fame with a whole online community with thousands of users sharing the currency and posting memes about it online.

Dogecoin is the only digital currency that bounced 300% in value within the 72 hours of its introduction. The ban on cryptocurrency from the Chinese market added to its advantage. Unfortunately, it lost most of its value with an online theft hack. However, the market boomed within a few days where its trading volume exceeded bitcoin and other cryptocurrencies combined for a short period of time. 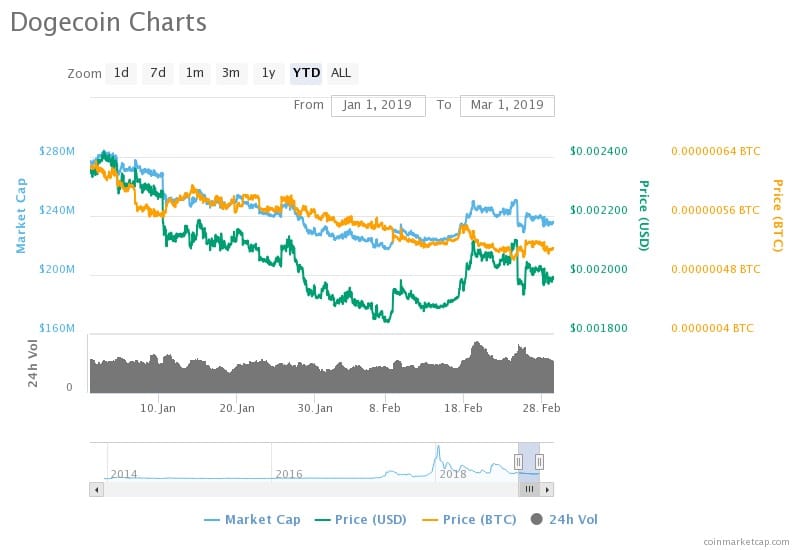 Nevertheless, the market has started improvising at a slow pace with the differences in the risen values being insignificant. The increasing market value exerts a bullish pressure on the cryptocurrency, and the 20-day exponential moving average falls in support of it. Though the percentage increase is as tiny as 1.74% with the market capitalization value growing from $232,768,085 USD to the current value, the upward movement of the values gives the bears the upper hand.

However, the MCap value of the cryptocurrency surpassed the bitcoin’s value with its current value. The market reached its peak on January 03 at 02:34 UTC with its MCap value as high as USD 283,768,085, the prices of USD and BTC were $0.002412 and 0.00000062 for the corresponding 24h volume of $17,916,017. The market, on the whole, has not been consistent. Apart from this, if you want to know the future of the coin price, go through Dogecoin predictions and understand the fluctuation to decide the right time to invest in it.

The 14-day moving average shows values ascending from 225,627,888 USD on February 15 to current value with a 4.64 percent increase. Though both the averages point towards the uptrend, the percentage rises in both the averages are insignificant, which points the market balance in favor of sellers. Hence, any investors with long term investment plans should observe the market trend before taking a step further. Once the values increase steadily, it will turn out advantageous for the traders, and they will attain more benefit from it. Traders will have to sideline to explore the market further before indulging in any investments.

One’s Current Investment On ETC Can Be Devalued In Future