ApeCoin has been the rage, but before venturing further, let us focus on the NFT collection. Bored Ape Yacht Club is one of the most significant NFT projects, second only to the crypto punks. The BAYC was responsible for kicking off. Some people might not even have noticed the APEs popping up over social media platforms like Twitter as well as in the mainstream media.

Talking about the ApeCoin that is structured as a reward system for NFT holders for simply being members of the board ABC Club, and after being officially announced on Mar 16, APE is now in full swing. The coin is free to claim for those NFT holders and some 125 million. The team has big plans for the APE token, including access to exclusive games, additional airdrops, and metaverse experiences.

Technically, APE is an Ethereum-based token built for governance and utility. According to the official Twitter page of APE, it is billed as a token for commerce & culture gaming used to empower decentralized community building at the forefront of Web 3.

APE is a reflection of the growing desire of the crypto community for decentralization, a sentiment that has been brewing in the backwaters. APE is officially the creation of ApeCoin DAO, a decentralized autonomous institution created to govern a coin and shape its roadmap. With a market capitalization of $1,407,262,949, with 30% of its tokens in circulation, ApeCoin is ranked at the 34th position in the current hierarchy of cryptocurrencies. 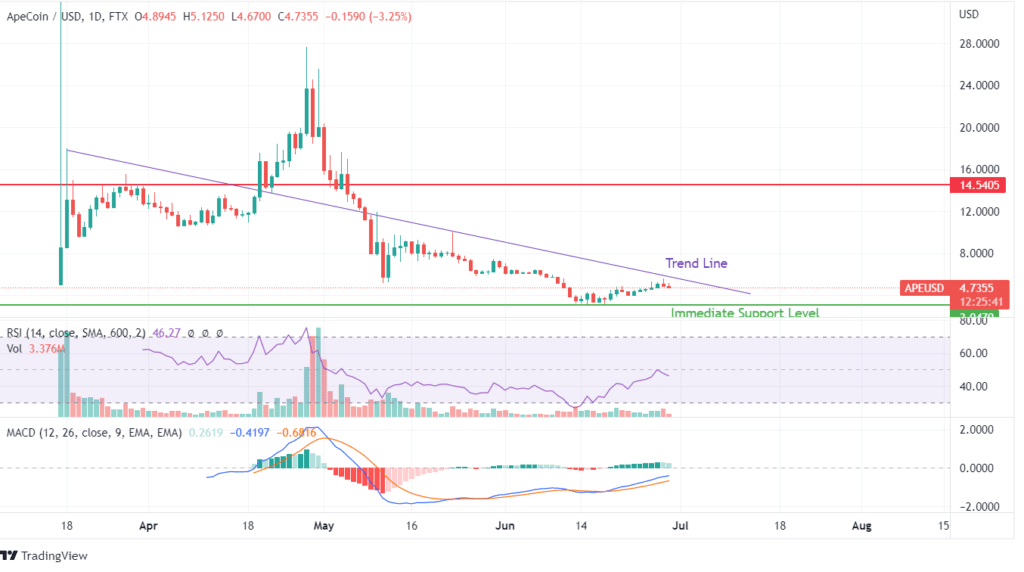 As visible, ApeCoin quickly hit a huge jump in just a month of its official airdrops. The subsequent reward profit booking sentiment pushed the valuation into the negative trendline from its first day. At present, APE is trading at a discount of 87% from its ATH.

The recent lows of under $3 were a testament to test the patience of buyers and ApeCoin believers. Presently, the negative sentiment on ApeCoin dominates its future potential since only 30% of its total supply is available in the market.

This low circulation can either create sudden spikes in market value for the future or force others to book profits when more tokens are released in the market. The current trend line may put this token under selling pressure. However, the RSI and MACD indicators imply consistent buying happening at lower price levels.