Ripple (XRP) is a technology that works as both- a cryptocurrency and a digital payment network for online financial transactions. XRP denotes the cryptocurrency. Ripple is the 3rd largest bitcoin in the crypto market after Bitcoin and Ethereum, and it operates on an open source and decentralized peer-to-peer platform that allows for a seamless transfer of revenue in any form – any fiat currency or any cryptocurrency. The digital currency, XRP acts as a bridge to other currencies, because it does not discriminate between the types of currency (Fiat/Crypto) and hence makes exchanging a lot easier. The Ripple platform does not work on PoW or PoS consensus algorithm. Instead, it has its protocol which is based on a shared database or ledger that uses the consensus process, which makes exchanges, transactions, and payments of money in a distributed process. The major advantage is the mathematical algorithms and a cryptocurrency that obeys fixed rules, which makes Ripple more secure and reliable. 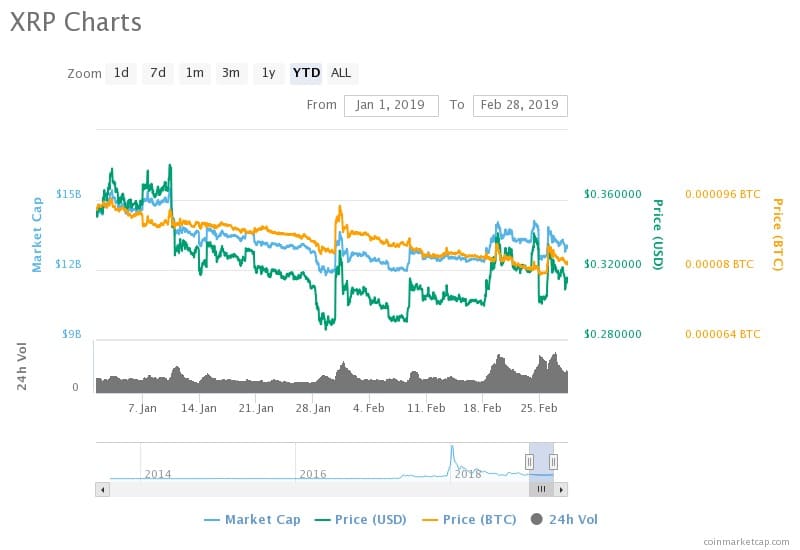 Ripple (XRP) is the 3rd largest bitcoin in the crypto market with its market cap value of USD 12,973,043,058 for a 24h volume of $682,463,848 on February 28 at 10:34 UTC. This MCap value is based on the circulating supply of 41,365,634,610 XRP coins from a total supply of 99,991,689,289 XRP coins in the market. The market cap value of this cryptocurrency has been consistent. Although the trend has seen a downfall now and then, the currency manages to raise its values and compensate for the loss. The market value of the digital currency was at its peak at the beginning of January between 2nd and 10th where the values crossed 15 billion USD. The highest was on January 10 at 11:34 UTC with a value of $15,446,296,297 which is 16.01% greater than the current value. However, the values fell after that. The lowest the currency had reached was on January 29 with its MCap value $11,768,152,029. However, the market cap value increased and has been consistent whilst reaching its current value. The 14-day EMA also shows an uptrend with a hike in numbers from February 14 of USD 12,590,992,207 which is 3.03% higher than the current value. Although the percentage rise in EMA is negligible, the market has been an uptrend, pushing the cryptocurrency into the bulls market.

According to the stats from CoinMarketCap, the prices of USD and BTC as on February 28 at 10:34 UTC are $0.313619 and 0.00008140 respectively. An analysis shows that the price of USD had dropped from an all-time high of $0.380192 on January 10, which is 17.51% higher than the current price, and have been going downtrend ever since. The price of BTC has been on a similar wave with the MCap value. It reached its all-time high on January 3 at 00:34 UTC with the price of 0.00009618 which is 15.31% higher than the current value. The price of BTC started on a higher note than the XRP’s MCap value. However, the values conjoined for a brief moment on February 18, after which the MCap value of the cryptocurrency surpassed the bitcoin’s value with its current value and took the lead. The price of USD did not join the gain and have been on major variations with its trend. The digital currency reached its milestone between January 29 and January 31, when the price of USD sprang from a low of $0.285888 to high of $0.330049 with a 15.45 % growth in a span of 2 days.

The 20-day EMA shows that the current market is on the uptrend with respect to MCap, the price of USD and 24h volume. There has been an increase in value, an average of 2.80 percentage with respect to the market cap. Although the market has been on the rise with the bullish pressure, the increase has been slow moving, and the percentages of the moving averages have been inadequate. This points the market in favor of the sellers. Hence, the traders and the community users ready to invest will have to sideline themselves, observe and explore the market trend and invest once there is a significant rise so that they can benefit from this digital currency.

Project Z and its Overall Characterization (Components of Its Existence)