Blockchains at the current time are being used for processing multiple different types of transactions. Processing all of them throughout the main blockchain can often lead to bottlenecks and lesser TPS. Avalanche handled such situations by creating three distinct chains, namely X-Chain, for exchanging tokens with a base transaction fee of $0.001 AVAX using directed acyclic graphs.

Apart from this chain, there are P-Chains through which validators are rewarded with their tokens in return for their staked AVAX. The final chain is marked Contact Chain or C-Chain, which addresses the need to process smart contact transitions for decentralized finance and decentralized applications.

AVAX has declined over 88% in 2022, with a combined decline of 91% from its all-time high of $160. Avalanche has also been progressively moving in growth prospects with a market valuation of $4.28 billion based on its 43% circulating supply, which places Avalanche in the 18th position.

AVAX is currently consolidating near its bounce-back support level of $13, and progressive price action requires breaching the short-term moving average of 100 days. Technicals are howling signs of an uptrend, but the price has already suffered massive declines. 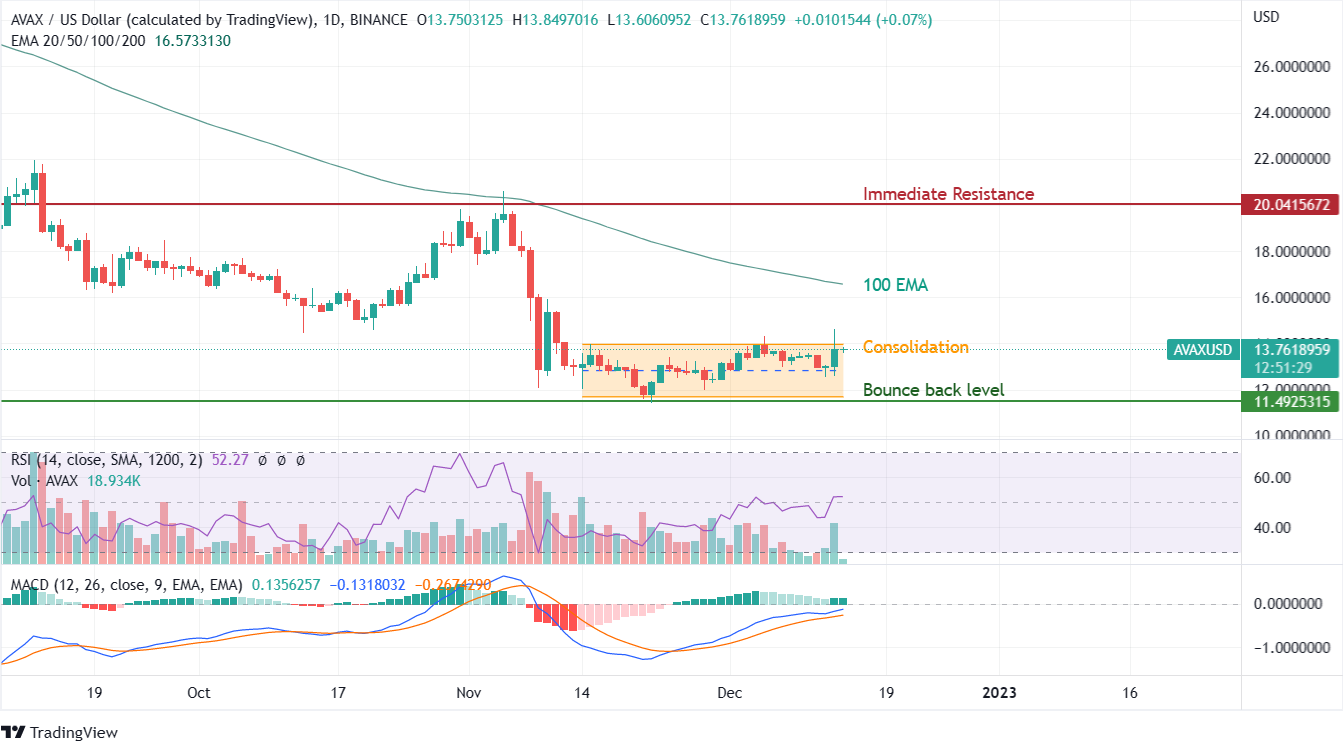 Daily candlestick pattern analysis concerning the last three months of price action has been a straightforward negative trend. The resistance comes to around $20 based on price action, while the moving average for 100 days shifts to $16. A sudden decline in the shape of rejection from $20 came in November 2022, which pushed that value down by 45% to $11.

So far, buyers have actively bought from this dip, taking the prices to the current high of $14, which comes to around 26%. The MACD indicator shows a positive breakout opportunity based on the curves pushing toward positive territory. RSI during the last month has jumped from 29 to 52, which confirms buying activity has taken a jump. Transaction volumes during this rising phase have been consistent; hence, as per our Avalanche price predictions, the price action indicates a positive breakout expectation.

Buyers at current value shouldn’t expect a mind-boggling breakout as weekly patterns are highly negative. Even with a consistent uptrend, AVAX requires over 120% movement to reach its first weekly resistance, followed by 650% and 1000% gains from the current value of $13.78 to reach its second resistance and an all-time high.

Despite the numbers highlighting a high return prospect, the fact that markets rejected those valuations indicates it to be a time-dependent variable. However, short-term gains in the vicinity of 40 to 60% can be expected for Avalanche, keeping the price between $20 to $30. The red candle of last week has dissuaded buying activity. Otherwise, AVAX could already have tested its 100 EMA curve.

XRP regains the support of $0.4: Should you invest now?