If you look at Axie Infinity at its peak, you will soon see that it had well over 3 million players. The market cap also stood at $10 billion as well. Players in a lot of developing countries were said to be reporting way more money from playing the game than they were from their normal daily wage.

If you look at today, however, you will see that the market cap only stands at $850 million, and they are also only getting around 15,000 players daily. The recent hack looks to have made Axie’s issues bigger than anticipated, but if you break everything down, you will soon see that the player base, in general, was actually falling way before the hack.

Players said that the game mechanics were not as good as they could be and that the playable NFTs were not great either. AXS, which is their native token, has also dived as it has shot down from $160 to $9. The game is finding it very hard to attract traditional gamers to the blockchain. Calvaria is now looking to fix some of the game’s issues, and they are also launching Duels of Eternity, their flagship game.

The Downfall of Axie

Axie Infinity used to be one of the top premier options in the metaverse. It happens to support some of the biggest P2E ecosystems, and it also supports the NFT game as well. Users can use this to try and breed, train, and ultimately compete against other Axies.

With this, you can then earn a lot of in-game tokens, so you can then reap the profits. AXS gained a great deal of popularity during the pandemic as people began to look for additional sources of income. If you look at things now, however, you will soon see that it is but a fraction of what it once was. The average number of people playing the game now stands at 701,447, and the game is currently experiencing its lowest levels since January 2021. Axie Infinity also lost 1.2 million of their players last June alone.

Since then, the price of SLP, or Smooth Love Position, has taken over. The decline happened as a result of the hacking, but the truth is, there were red flags way before this. Ronin, who is the digital provider for the game, was hacked, and this meant that hackers in the US were able to come out with around 600 million dollars.

This incident meant that the players of the game lost out substantially. It also greatly impacted the trust that they once had in the game. The development team is now working hard to gain back as many customer funds as possible.

The Evolution of the Crypto World

The cryptocurrency world has changed quite a lot in the last couple of years. If you look at Bitcoin or even Ethereum, then you will soon see that they were the only coins available at one point. Now there are hundreds of popular currencies on the market.

A lot of this has happened as a result of the industry adopting more tech, but at the end of the day, it also comes down to demand. Some of the major ways that the industry has changed is the fact big businesses and industries have now started to accept it.

Big corporations are now open to accepting this currency as a valid form of payment. El Salvador was also the first country to adopt cryptocurrency as a full legal tender.

Even though cryptocurrency is on the rise and being adopted at a faster rate than ever before, it is important to know that some coins are being left behind in the dust. Axie is one of them, but Toon Finance looks to be stepping up. In the shadow of this once prestigious coin, a new one is rising, and it is showing a bigger and better promise than ever before. 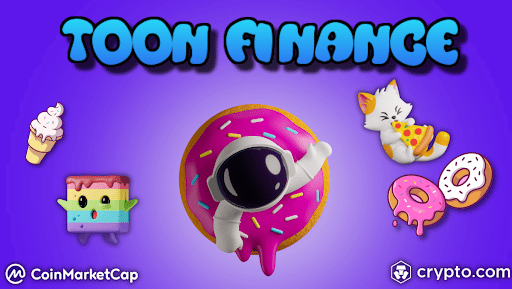 Toon Finance has been inspired by a lot of cute and cuddly characters. With that in mind, it is also one of the hottest coins around right now. It is a full, decentralized application, and it has also been designed by a number of blockchain developers too.

They aim to try and fix some of the externality surrounding the P2E network, and they are also trying to ensure a P2E metaverse that is fully backed and supported by SHA256 encryption. So now you understand the downfall of Axie, it is important to look at the rise of Toon Finance. It’s a valid point to question because a lot of things about this coin are, in fact, surprising. That being said, if you look at the coin’s fundamentals and the general ecosystem, you will soon see that things are very clear.

Toon Finance is more than just a standard meme coin. This alone is why it is doing so well. The creators of this coin are doing what they can to build a solid ecosystem, and there is a lot of value to be had here. Some of the main highlights of this coin include the fact that it is creating a full, decentralized exchange and that it will allow people to seamlessly buy, sell, and even trade coins hassle-free.

It also helps to develop an environment that is completely safe for these types of trades to go through. The great thing about this is that you do not have to create an account, nor do you have to go through a lengthy validation step. All you have to do is go onto the DEX platform and then make your trade.

So, it looks like Axie is down, and Toon Finance is stepping up, and it’s obvious to see why. Toon Finance is doing what they can to try and become a leader, and they are adopting innovative strategies that actually satisfy client demand. Axie, on the other hand, appears to be burning out.

Toon Finance is still the most searched meme coin presale, and the coin is receiving more hype and media attention due to its new play-to-earn features.

What is Play to Earn in Crypto, and why is Toon Finance #1?

“Play to earn” is a new model for games that allows players to generate income from their in-game activity. This model has already been implemented in some games, but it is still in its early stages. Nevertheless, there are a few key reasons why play to earn could become a major force in the gaming industry and beyond.

The play-to-earn model is still in its early stages, but it has the potential to revolutionize the gaming industry and beyond.

By allowing players to generate income from their in-game activity, this model could provide a much-needed alternative to traditional microtransactions. Additionally, blockchain technology can be used to create secure and transparent systems for player-to-player transactions. While some challenges still need to be addressed, such as player motivation and game balance, the play-to-earn model has a lot of potentials and could eventually become the norm for games.

BudBlockz presale doubles investors' money: Is it the next STEPN?