Basic Attention Tokens (BAT) are open-source, decentralized ad exchange platform built on the Ethereum platform. It uses Brave browser as the networking platform to obtain various advertising services. This Brave browser is an open-source and a focused privacy browser which blocks trackers and malware. It also blocks ads automatically and anonymously, giving the platform’s users a faster and a secure experience compare to other cryptos.   BAT lets the users gain from the millions of ads subjected to them. BAT’s features include- Privacy, Enhanced advertisement matching, and improved experiences. The project seeks to address fraud and opaqueness in digital advertising. It uses the blockchain for the security and rewards publishers accordingly. 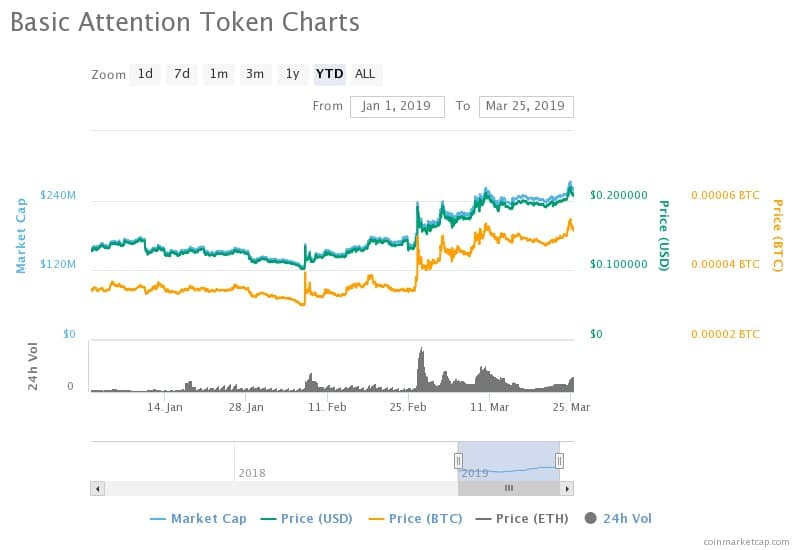 Based on the reports from Coinmarketcap, BAT is the 25th largest cryptocurrency in the market with the current Mcap trading at USD 257,082,554 on March 25 at 11:34 UTC. Based on the analysis, the MCap value depends on the circulating supply of 1,244,766,783 BAT coins out of a total of 1,500,000,000 coins and the corresponding 24h volume of $22,189,025. The latest value is higher than its relative value of USD 162,039,256 on February 25 by 58.65%. The market traded above 160 million during the initial opening in January and maintained linear values, with no subsequent rise or fall, until February 06. Hence it touched the lowest on February o6 with $126,100,071 which is down by more than 100% compared to the current value. However, the market value has been on the increase after that. It reached its peak on March 24 with a value of USD 273,315,640. Though the current value is lesser than the peak value, the percentage difference is comparatively lesser. The overall market looks positive and shows the ease with the bullish pressure on the cryptocurrency.

The moving averages support the market’s progress. The 20-day EMA show shows an uptrend with the values increasing from March 05 with a percentage increase of 17.35%. And the 14-day moving average shows a hike by 7.38% in the MCap values. The supportive percentages and the booming market, along with the bullish pressure turn the market in favor of the buyers. According to BAT forecast, the short-term investment from the traders will work out advantageous for the cryptocurrency’s market growth. Their contributions return high profits, providing the long-term investors a steady base.

FinTech Conclave To Be Held on Monday by NITI Aayog