Basic Attention Token is cryptocurrencies that make use of the Ethereum blockchain and a Brave browser as the networking platform to obtain various advertising services. This Brave browser is an open-source and a privacy-focused browser. It also automatically and anonymously blocks ads and trackers, giving the users a faster and secure experience compare to other cryptos. The project seeks to address fraud and opaqueness in digital advertising.BAT lets the users gain from the millions of ads subjected to them. BAT’s features include- Privacy, Enhanced advertisement matching, and improved experiences. 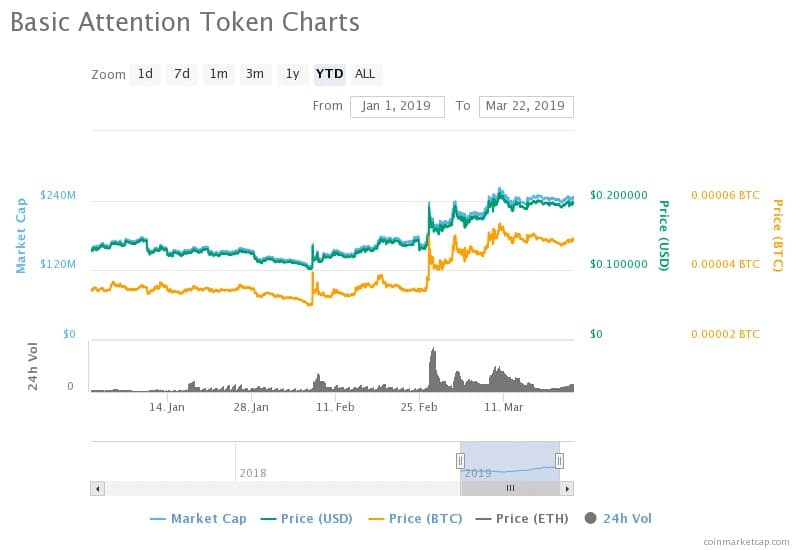 Current price value of USD and BTC are 0.197598 and 0.00004906 on March 22 at 15:14 UTC. Both the prices of BTC and USD are on a swing with its immediate ups and downs matching the MCap’s sequence. Along with MCap value, the BTC and USD prices touched its peak on March 10 with values of $0.210354 and 0.00005320 which are 6.46% and 8.44% higher than the current values. The Price of USD and the MCap value of the cryptocurrency have overlapping each other wherein the price of BTC has been running parallel to the pair and sharing the similar highs and lows. The price of BTC started as low as 0.00003434, which is lower than the current value by 42.87%.  The currency reached its milestone between USD 0.130703 on February 25 and USD 0.177871 February 26, with a whopping 36.09 percentage increase in the USD pricing within a period of 24 hours. The traders must explore the trend and contribute towards raising the value to keep the market uptrend.

However, the moving averages do not exhibit a major increase in values. The 20-day EMA show shows an uptrend with the values increasing from USD 234,483,489 on March 02 to the present value by a negligible 4.84%. And the 14-day moving average shows an uptrend in the MCap value by 0.64%. The clash in the moving averages puts the crypto coin in the bear market territory; however, the comprehensive market growth favors the bulls and hence the buyers. Considering the BAT price forecast, investors with long-term investment plans should venture in this cryptocurrency.  As far as traders with short-term plans are concerned, their investment in this currency will make it more valuable and increase the stability drastically in the future.