cryptocurrency prices, while currently, the bulls are trading at a price above $8000 in the cryptomarket. Today, Bitcoin value is as equivalent as a phase in the Bull Run of 2017.

Market Capitalization is an essential variable for the cryptocurrencies to rank and have a position in the cryptomarket. It takes into consideration two factors, i.e. Total Circulating Supply, Price of the coin, and their product.

However, we are aware of the top-ranked leader in the cryptomarket that drives the Market Capitalization with its around 60% dominance compared to all cryptocurrencies which show that rest of the coins only constitute 40% of the remaining chunk.

Bitcoin, which is a distinct grade forte in the market space, has done exceptionally well in the past week surge is likely the result of it not only splitting the $8,000 level. But it is also making investors go gaga for their investments in Bitcoin and giving momentum to the Bitcoin Derivative Tools to have a long position for a while now until Bulls do their part. Although, the buyers would be expected to invest disproportionately in the most established and appraised security as per Bitcoin predictions.

BTC price rallied almost 50 percent since the beginning of May. Many coins collapsed in value, while Bitcoin slumped 74 percent in 2018, which was a year of harsh crypto winters. Now that crypto summers are on a roll, Bitcoin value traded at an all-time high of almost $20,000 in December 2017. 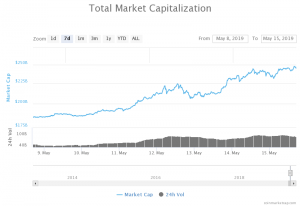 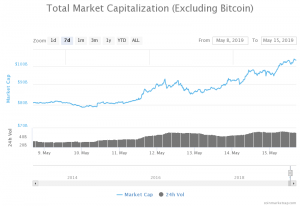 The difference between the two charts very distinctly highlights the importance of Bitcoin, its price, its vogue amongst the whale investors and its market leader quality that increases the circulation of Bitcoin in the market and changes hands at a speed more than the rate at which the light travels.