Market leader Bitcoin moves in a negative trend while other cryptocurrencies are at least attempting to consolidate. Despite the huge active circulation, there have been no supply constraints to increase BTC value. Last time, the experts suggested a buying rally as BTC would move towards 100% circulation of tokens. On the contrary, there seems to be a decline in the demand for BTC.

The security and unparalleled decentralization offered by BTC should not be taken lightly. Since the energy consumption of BTC is available in a public portal while other payment ecosystems such as banking, visa, or MasterCard aren’t available, it is considered a visible ally of global warming. Despite the claims for and against Bitcoin, the fundamental advantage of this blockchain cannot be ignored.

Bitcoin has breached immediate support with negative movement leading the value towards the last support level of $17831. The technical outlook is extremely negative and must be taken as a warning sign. One might get trapped in a falling knife scenario if they aren’t alert. Should you sell your BTC holdings? Read our Bitcoin predictions to know. 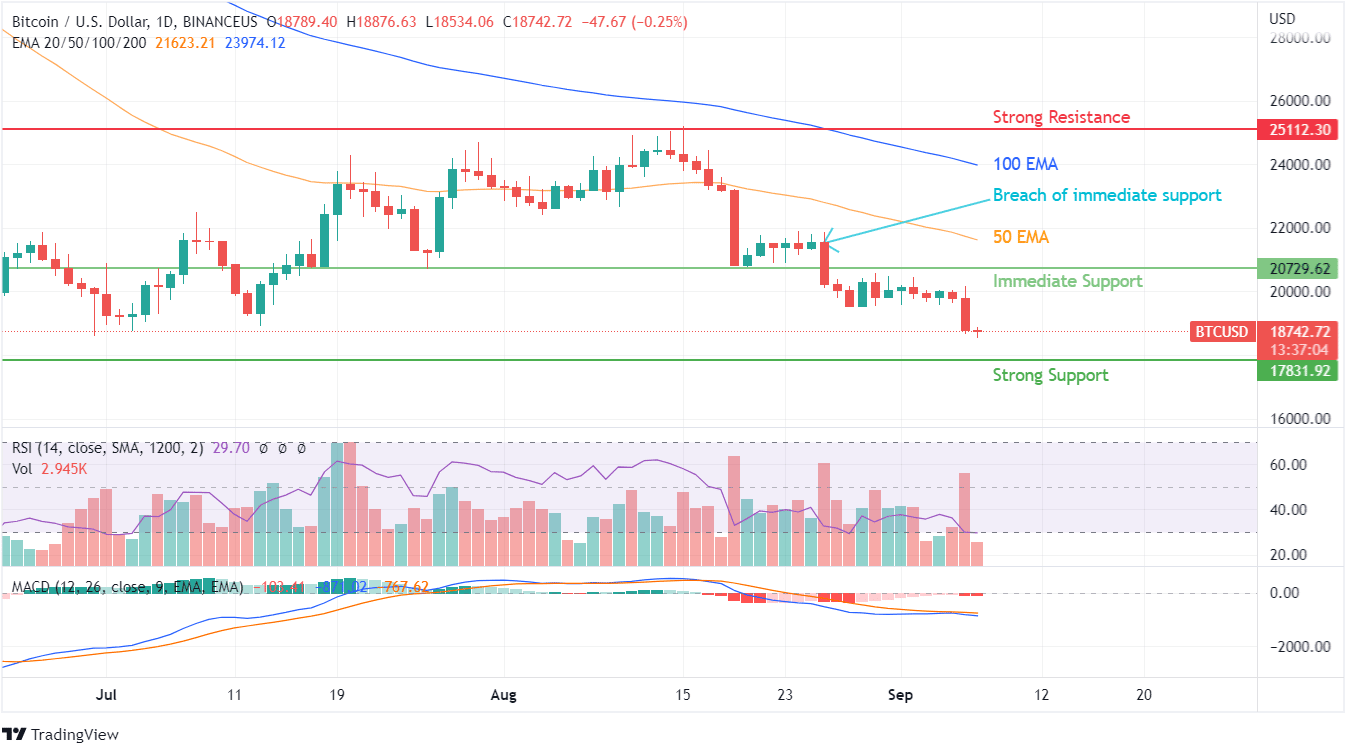 Bitcoin’s negative outlook has been under development since August 14, when it first touched $25,000 after months. The profit booking sentiment that brewed hasn’t shown any sign of slowing down. This market leader has already lost huge value without any sign or attempt towards consolidation.

Such a negative-yielding price action of Bitcoin can be highly dangerous for cryptocurrency enthusiasts. Both the RSI and MACD indicators confirmed and ascertained a negative outlook in the short and long term.

The most alarming factor combined with BTC’s decline is the high volume breach of support levels, which is destroying all hopes of short-term retracement. In the last few weeks, three such instances have happened that could sustain the negative outlook for BTC even for longer durations.

On weekly charts, BTC has tanked below the immediate support of $19,300, which seems like it is headed towards the latest support level of $17800. Challenging the supporting sentiment at such a pivot level can create a huge panic selling momentum for BTC.