The year of 2018 was by and large dominated by the bear markets. And the case with Bitcoin was no different. The giant cryptocurrency had been suffering devaluation for over six months, which continued even in January 2019.

However, February brought the much-needed relief, as the month was closed in green. Bitcoin rose up by 11% in the month of February, breaking the streak of downfall. This was the longest falling reign for Bitcoin since inception, which troubled most cryptocurrencies throughout 2018. Some of the day traders are using this upswing to make profits, as they believe that the market will go further go down, while others are banking on expectations that the toughest bear market yet would come to an end soon. 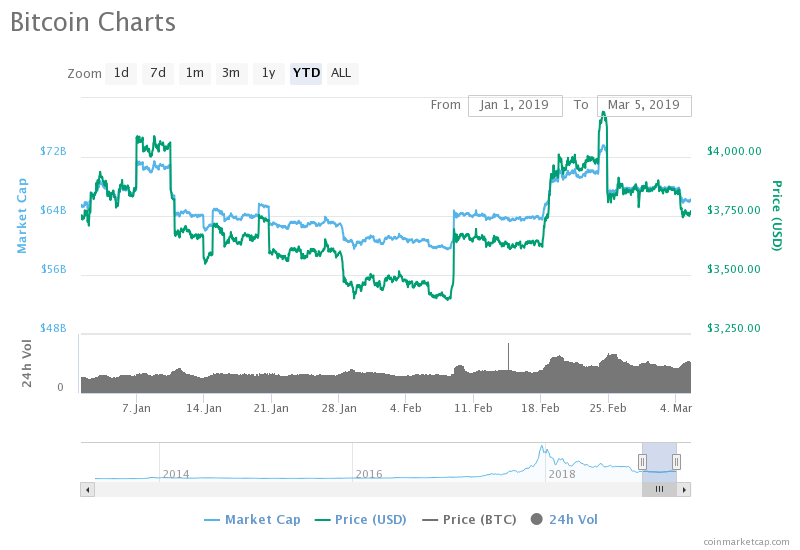 During February, the total value of the cryptocurrency market soared up 16%, from $112 billion at the start of the month to $130 billion at the end. Therefore, it can safely be concluded that the market is looking good now. And though 2018 was a dreadful year in terms of pricing, it had some positives, too, on the flip side. The year went by witnessed a number of announcements, partnerships, upgrades, and many positive such activities within the Bitcoin-led ecosystem. The crash which started mid-year 2018, saw hopes on crypto crumbling down. However, 2019 seems promising.

Though Bitcoin mostly witnessed ups during the 28 days of February, it had its fair share of downs as well. At the beginning of the month, the most expensive cryptocurrency was valued at $3,500, and it gained about $400 till the month end to be valued at $3,900. By looking at the Bitcoin price prediction report, established traders have suggested that the positive growth will continue, and the coin will soon touch the $4,000 mark.

Too soon to declare the Bull?

Blockchain.com CEO, Dan Held stated that Bitcoin is far from dead as many skeptics believe it to be, affirming though, that the coin will take some time to recover from the damage done in the past six months. Various crypto analysts are being optimistic to declare that a new bull run has been started. However, it is obviously too early to believe that. Sure, Bitcoin grew by 11% which is great news in itself. But let’s not forget the previous six months of downfall, and that drastic one in November when the digital currency fell by a mammoth 37%, which caused chaos in the market.

Quite a few traders have suggested that the green signal could adversely affect the cryptocurrency as well. People will be encouraged to sell more at the end of the losing streak, simply in a bid to minimize losses. Popular crypto figure “Mayne” tweeted that the current situation could push Bitcoin on either side of the market. The bear can pull it at $3,150 in worst case scenario, or the bull can pull it at $4,000 at the best.

At the best, the current developments in the Bitcoin ecosystem will ease some of the over-cautious folks, though not completely. Established investors are likely to invest in something more stable and sustainable in the long run.

Ethereum Classic Reaffirms Importance of Decentralization, as ETC is on the Rise

Ethereum Continues to Fall, Despite the Launch of Much Awaited Constantinople