Bitcoin (BTC), recently traced in the upper swings of the crypto market. The price (USD) 3,645.30 was evident two months ago on February 09 with the market cap of 63,893,254,093 USD. This was the point from where the center of the dart was aimed, i.e. the market for BTC has been experiencing an increasing rate ever since. 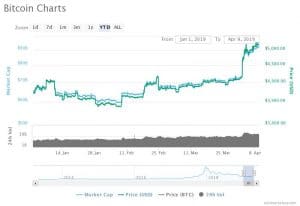 Day’s statistics at a glance:

Either from Dec '18 low or from retest of same (circa analog dbl bottom in 2015) it would not surprise me if $BTC enters a new parabolic phase. $btcusd pic.twitter.com/XV89Qz7P4n

As per the above tweet and the current scenario, we particularly highlight that BTC on the upward path of the parabola curve. The same is evident from the hypothetical halves of the above Coinmarketcap graph, wherein the first half observed is from the start of the year 2019 till February 9th. Today, it is 42.56% higher than the midpoint of the imaginary parabola.

The predictions are such that Bitcoin is likely to make hay when the market is in the bullish trends and the same scenario will last long rising above the expectations of the investors and giving them delightful returns.

TRON is Battling with EOS dApp, the Coin is Making Sure it Rules the Market