Bitcoin (BTC) is a decentralized consensus network that enables an alternate payment system in the form of fully digital currency exchange. Secured by complex algorithms like SHA-256, it is a peer to peer payment network that requires no central authority to operate. A group of an individual pseudonym as “Satoshi Nakamoto” published the Whitepaper of Bitcoin on October 31st, 2008. There, they described it as, “a purely peer-to-peer version of electronic cash would allow online payments to be sent directly from one party to another without going through a financial institution.” 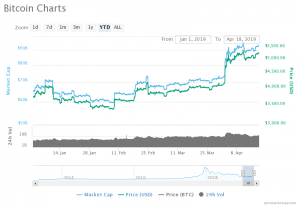 Let’s have a look at historical fluctuations in the price of Bitcoin (BTC):

Almost 11 years have passed since Bitcoin (BTC) into existence. However, its popularity is still intact. Some of the reasons for its raising demand is state-of-the-art features like open-source, public availability, no controlling or governing body and the cherry on the cake is that anyone can trade in it. Within a short period of time, Bitcoin price grew significantly; making the BTC/USD pair quite popular among active traders and investors.

Moreover, Bitcoin (BTC) allows exciting uses that could not be covered by any previous payment system. According to current pattern, Bitcoin (BTC) is moving within a bullish flag pattern formation and suggests of a potential imminent breakout to the upside. At present, there seems to be a mild resistance at USD 5250. In the short term, there could be a minor downward slide and move toward the correction level of $5,230 or $5,200. However, according to BTC forecast, the overall trend seems to be bullish, and the price is likely to bounce back and trade past $5,300, $5,320 and $5,350 resistance levels.

Dogecoin (DOGE) Started as a Meme, Turned Out to be the Most Likeable Cryptocurrency