Bitcoin, christened as the world’s first cryptocurrency, is an innovative payment network which allows peer to peer transactions that are verified by network nodes through cryptography. The aim and vision of Bitcoin are to set up a substitute payment and settlement system which can replace the conventional payment system globally. It facilitates peer-to-peer payment system and complete anonymity of transactions. 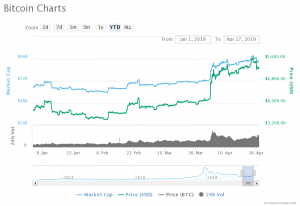 The path of Bitcoin (BTC) has been really stable throughout the year. There have been minor instances of downward movement of price. However, the highest growth can be seen after the 1st April market boom. It gained around 25 % in just 1 day. Since then, Bitcoin (BTC) is on a bullish run. The highest point of the year was just 3 days back at 5570.74 USD.

But the price trend of Bitcoin (BTC) over the last 24 hours is noteworthy. It has shown a steep rise and fall over the day. It started at a high point of 5344 USD and later could not sustain the momentum and fell short by 100 USD in just a few hours. Then again it gained some strength only to lose 150 USD after 12 hours. Bitcoin has shown a total of 8 steep changes in its pricing over the last 24 hours.

As mentioned earlier, Bitcoin is being traded around 5200 USD right now. The coin has been performing very well right after the doubts of crypto winter. It had managed to grow almost 75 % of its value in the last 120 days. The future of Bitcoin is definitely bullish. As a market leader, in the short term, the coin may reach as high as 6000 USD by the end of this quarter. The resistance should be there at 5560 USD. By the end of 2019, experts have predicted the price to touch as high as 7000 USD to 7200 USD. The long term outlook is bullish for Bitcoin.

We advise the long term investors to hold their coins till 2020 as the market boom is looming around. On the long term, a profit of 50% of the current value is expected.

More Options Being Added On VertBase, The Platform Will Allow Users To Trade Cryptocurrencies With GBP And EUR