Bitcoin is the first largest introduced into the crypto market. It is an open source digital payment currency that uses a digital medium of exchange. It’s peer-to-peer technology create and control monetary transactions on the exchange platform. Compared to the cryptocurrencies introduced after BTC, Transactions on BTC platform are rather simple, and the payments are made via Bitcoin wallet App on the user’s system or mobile device, with no requirement for intermediaries. Bitcoin is mined using specialized hardware which processes the transaction and secures the network. It still is the most craved on cryptocurrency, even today. 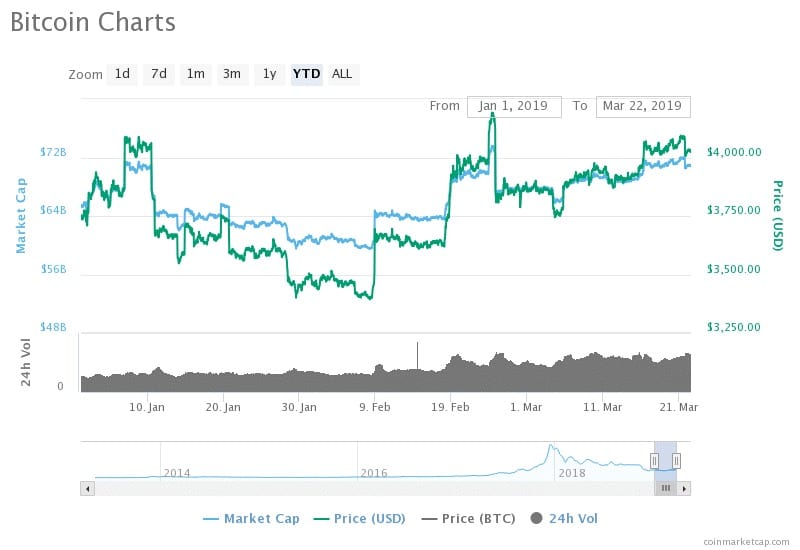 The Mcap Value traded at USD 73,566,402,312, higher by 3.62% from the present day value. The peak price of USD was $4190.57, and the percentage difference with the current value was similar to the MCap values. Bitcoin is a volatile cryptocurrency, due to which, the MCap and the price fell from its all-time high to $67,356,158,951 with a different percentage of 9.22%. The analysis shows that the recent values have been on a raise concerning both Mcap values and price of USD. This is proved by the significant percentage difference in current value with the 20-day Exponential Moving Average.  The values rose from $67,642,509,052 on March 02 to the current value by 4.96%. The 14-day MA analysis also shows an increase in percentage value from USD 69,055,972,598 on March 08. This percentage increase in both the moving averages and the overall booming market exerts the bullish pressure on the cryptocurrency. The market trend on a stable increase and based on our BTC price Prediction, the advantage of the bullish pressure forces the market balances rest in favor of the buyers.

The crypto coin reached its milestone with the price of USD per Bitcoin shooting between February 18 and 24, with the values increasing from $3628.61 to $4,190.57 by 15.49%, a spectacular rise within 06 days. This means its investment period for both- the traders and the investors on BTC. Their continued contribution to this cryptocurrency will further stabilize the value in the future.