Bitcoin- the most popular and the largest and the first cryptocurrency- is an open source digital payment currency that uses a digital medium of exchange and peer-to-peer technology to create and control monetary transactions on the exchange platform. Bitcoins are created by a competitive and decentralized technique called mining. Bitcoin mining is under process right now to reduce the cost of mining which will, in turn, give huge monetary returns. The total number of coins in circulation amounts to 21,000,000 BTC. 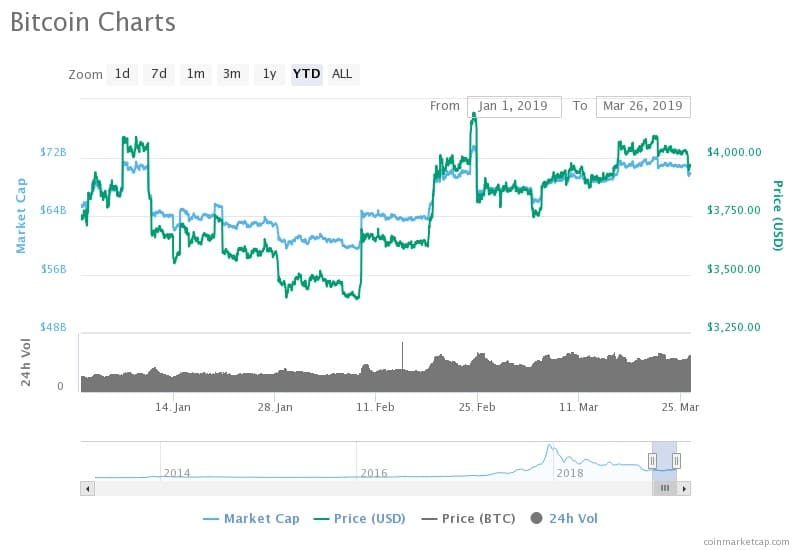 Bitcoin (BTC) is the 1st largest cryptocurrency in the crypto market whose current MCap value is trading at $69,856,216,782 USD for the corresponding 24h volume of $10,301,883,788 on March 26 at 9:19 UTC. The current price of USD per Bitcoin is $3966.77. The market opened at 65 billion USD in the year beginning, and reached a peak crossing 70 billion between January 7 and 10 with average pricing of USD 4030. The volatility of the cryptocurrency broke the peak price, and the market deteriorated. The cryptocurrency encountered its downtrend period between January 11 and February 08 reaching the lowest on February 08 at 07:34 UTC with the value of USD 59,547,966,963, which is lower than the current value by 17.31%. The values inclined from its low and hiked to a peak between February 19 and 24 crossing 70 billion USD and reaching the highest of USD 73,566,402,312. The current value is lower than its all-time high by 5.31%. The current trend, however, shows a downfall in the values gradually, which is evident with the insignificant increase in moving averages. The 20-day EMA exhibits an increase in value from $68,628,958,311 on 22:34 UTC to the current value by 1.79%. Similarly, the 14-day MA also shows a negligible increase in the value from $68,824,953,507 on March 12 at 23:34 UTC to the current value by an increasing percentage of 1.50%. The increasing percentages exert mild bullish pressure on the cryptocurrency market.

The comprehensive market and the moving average percentages do not provide significant growth in the market, rather points towards the degrading market. Hence, the balance falls in favor of the sellers. The investors and traders, both, with the long term and short term investment plans will have to sideline themselves and observe the market trend. Investment in this cryptocurrency will be profitable once there is a steady increase in the market value. So, go through the Bitcoin price prediction chart daily, to grab the opportunity of investment in this currency.

Crypto Regulation Bill Extended to April by the Russian Parliament