Bitcoin is the most popular cryptocurrency that dominates the crypto space with its blockchain technology. It was created in 2009; it works on a peer to peer network, where no intermediaries are involved. It is the digital currency, which aims to exclude intervention of any third parties during transactions on its network. Bitcoin working methodology is rather simple, and the payments are made via Bitcoin wallet App on the user’s system or mobile device. There is a maximum supply of 21,000,000 BTC coins in the market. 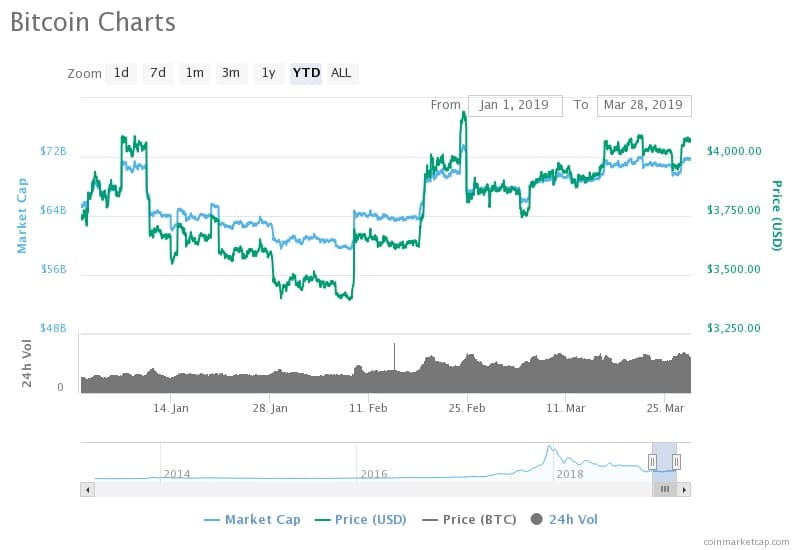 Bitcoin is the major and the 1st largest digital currency based on the current market cap value as on March 28 at 15:04 UTC is USD 71,603,249,028, its price trading at $4,065.08 and its 24h volume is $10,036,465,110, as per stats from CoinMarketCap. The market cap value is influenced by the circulating supply of 17,614,225 BTC coins out of a maximum supply of 21,000,000 BTC. A recent analysis revealed that the market cap value has been on a zest. The numbers rose by 6.61% between February 28 and the current value. This digital currency is highly volatile, and hence, there have been a few highs and lows the currency has got across in the past years. The first peak since the mcap value of the currency opened at the beginning of the year was between January 07 and 10, when the values crossed 70 billion USD.

Eventually, the market started going downtrend for a brief period of time, with the values going as low as USD 59,547,966,963 and the corresponding selling price of BTC was 3,397.71 USD on February 08. The second peak was between February 19 and 24; the MCap value reached an all-time high on February 24 with the value trading at USD 73,489,037,211 with its corresponding price at 4186.20 USD. The values have been on an uptrend with inconsequential lows for a major period. The moving average highlights the rise in a price value that offer good resistance support. The constant growth of the market gives the bulls an upper hand.

Ardent followers of Bitcoin have been predicting the future price value of the currency.  Chief commercial officer at Bitpay, Sonny Singh believes that there is a probability of BTC reaching as high as 15,000-20,000 USD by the end of 2019. He detailed on his prediction with an influx of funding for start-ups that is high on the cards of BTC. Similarly, Ronnie Moas, a cryptocurrency analyst believes there will be an increase in demand for BTC with the decreasing supply; hence the price value would cross 28,000 USD by the end of 2019. However, crypto derivatives believe that the cryptocurrency would be pulled down by the bearish pressure and would go as low as $3000 by the end of 2019. According to our Bitcoin price forecast, it seems that for the next five years, the prices of BTC are predicted to be on the increase.

Currently, the market is under bullish pressure, and coin switch estimates that 2019 will be positive with the continuing bullish pressure until the end of 2019 with the price reaching as high as 23,499 USD. Buyers should take advantage of this current market and invest further in it. As per predictions and the overall markets’ credibility, investors are in for a long term higher returns with Bitcoin in the future.