Bitcoin is the most popular and the largest cryptocurrency in the market. It is an open source digital payment currency that uses a digital medium of exchange and peer-to-peer technology to create and control monetary transactions on the exchange platform. Transactions on BTC platform are rather simple, and the payments are made via Bitcoin wallet App on the user’s system or mobile device. The user enters the Bitcoin address of the receiver along with the amount to be paid. Click on the send button completes the process. There is no requirement for intermediaries. Bitcoin is mined using specialized hardware which processes the transaction and secures the network. The price of Bitcoin grew significantly within a short period making BTC/USD, the most desired pair amidst the investors and traders. Bitcoin’s unique features set it apart from other cryptocurrencies and its one of a kind. 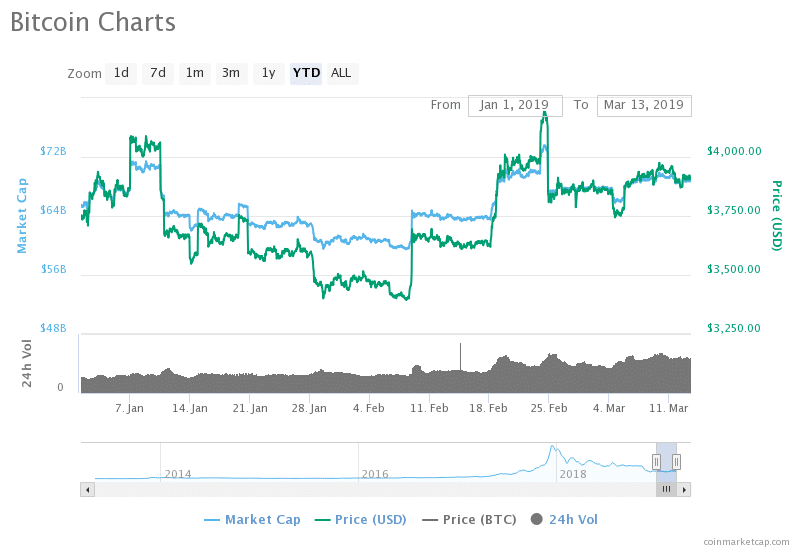 The market opened with MCap trading above 65 billion Dollars at the beginning of January and reached 71 billion USD between January 06 and January 10 after which came to the downfall. The market gradually grew after its downfall period. The Mcap values surged by 9.40% between February 17 and 19. The market cap traded at its all-time high of USD 73,566,402,312 on February 24 with the price of USD at its peak of USD 4190.57, compensating for the shortcomings in the past. The percentage difference in values- between the lowest value and the highest value is 23.55%. The price of USD has been on a similar path with the MCap value. However, the current MCap value and the price of USD is lower compared to its all-time high value. Nonetheless, the cryptocurrency reached its milestone when the price of USD bounced between February 18 and February 24 from USD 3,628.61 to USD 4,192.10, with a 15.53% hike in 6 days. With the current trend and Bitcoin price prediction report, it seems that the coin will work out beneficial for the traders with short-term investments.

The 20-day EMA exhibits a downtrend, with the values falling from USD 69,286,662,702 to the current value. The 14-day EMA shows an uptrend, with the MCap value of USD 67,772,779 ascending to its current value by 1.46 percent. The moving average shows an oscillation which points out the volatility of the cryptocurrency. With the current setback and the moving average degrading averages, the market balance is pointed in favor of the sellers. The investors with plans for long term investment will have to observe the market trend until there is a significant uptrend in the MCap values and prices. The traders investing more on this cryptocurrency will bring about stability in its MCap values.