The first cryptocurrency to have given the identification to the whole crypto market as well as blockchain technology, Bitcoin (BTC) is a network run on consensus. Bitcoin (BTC) gives a fresh payment system and a digital currency. The users power the whole network and it does not need for any central authority to be operated. Bitcoin (BTC) network was established in 2008 by an individual or group of individuals under a hidden name “Satoshi Nakamoto.” They described Bitcoin (BTC) as an online electronic peer-to-peer based payment system through which value can be transferred without any financial institutions. 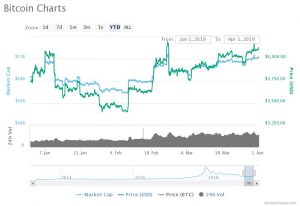 Bitcoin (BTC) is the largest cryptocurrency in the whole market globally. It is also ranked 1 for its high market cap. It has the highest return on Investment of 2952.17%. The maximum supply of coins it supports stands at 21,000,000 BTC. The circulating supply and the total supply are at 17,620,525 BTC each as of now.

The graph of Bitcoin (BTC) has not been very consistent since the beginning of this year. It has its lowest point somewhere around 8th February, and the highest point was reached just after 15 days. So, the uncertainties have continued in the price of Bitcoin (BTC). The value of market cap on February 24 was 73,489,037,211 USD and the value of each coin with respect to USD for the same day was 4,186.2 USD. The current value of market cap and each coins are 1.01% and 1.38% less than the value of February 24. After February 24 the value fell creating a steep. However, it has been rising gradually after the fall.

Looking at the current graph of this year, it is really tough to predict the price without any external forces. As per BTC Prediction, the price is still hovering around 4000 USD, and experts have predicted the price to be swinging around that figure to inflate again in this quarter. So, we advise the buyers to reserve their seats at a steep dip and leverage their position around 4200 USD. And this may come in a few weeks.

If this figure is achieved before the stipulated time, investors may aim for a higher amount as Bitcoin (BTC) have cleared many speculators in recent times. The upcoming U.S. Elections, change in the Fed Rate may help Bitcoin (BTC) to gain its previous momentum.