Bitcoin (BTC) is a peer-to-peer transaction technology that uses a decentralized consensus network which acts as a substitute for the conventional payment mechanisms. Bitcoin (BTC) allows a fully digital currency exchange. In addition to that Bitcoin doesn’t require any central authority to operate. On October 31st, 2008, a group of an individual pseudonym as “Satoshi Nakamoto” published the Whitepaper of Bitcoin. In their own words, Bitcoin is a purely peer-to-peer version of electronic cash allowing a user to directly interact with each other and exchange online payments without going through a financial institution and paying a minimum amount of transaction fees. 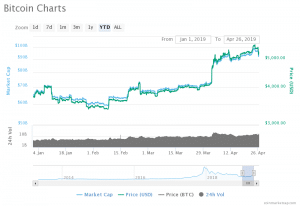 Let’s have a look at historical fluctuations in the price of Bitcoin (BTC):

Having a joy ride because of the cutting edge technologies like open-source, public availability, no controlling or governing body and open for all kind of services, Bitcoin (BTC), almost 11 years have passed since its launch, is ruling the crypto market and its popularity is intact as well. Within a short period of time, Bitcoin price grew significantly; making the BTC/USD pair quite popular among active traders and crypto investors. According to various analysts and experts, Bitcoin is showing a bullish pattern, and it will continue its march in Q2 of 2019 as well. Earlier, on April 18, According to BTC price forecast, we predicted that there was a mild resistance at 5250 USD, however, in just a few days, Bitcoin (BTC) broke the resistance level and touched the $5,270 mark. Following the same pattern, the new resistance level is at $5,300 and the support level is $5,270. It is most likely that Bitcoin will make an imminent breakout to the upside. If the current bullish trend persists (which is most likely going to happen), by the end of 2019, Bitcoin may trade around $7,000.