Bitcoin (BTC) is a crypto network based on blockchain technology. Bitcoin (BTC) was created with an aim to set up a unique payment and settlement system out of the conventional one. It is completely decentralized; it means no authority is needed for verification of the transactions. It is considered as the market pioneer of present times. Bitcoin (BTC) is a peer-to-peer payment system and has already given an alternative to the conventional financial system. 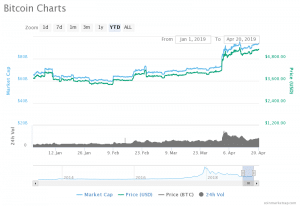 Just out of the crypto winter, Bitcoin (BTC) did not start the year as expected. The value of each coin at the beginning of 2019 was 3754 USD. But, it has been showing a gradual and steady growth since then. With little variation, the coin has again emerged as the most sought after crypto coin. However, the maximum gain was received after the April 1st boom. In a day only, Bitcoin (BTC) gained around 800 USD in its value. But after that, the coin is facing some market corrections. The market cap as on 20th March was 71,287,831,577 USD. The value of each coin on the same day was 4050.56 USD. The market cap has increased by 31.98 % in the last 30 days, and the value of each coin has also gained 31.57 % since 20th March.

As mentioned earlier, Bitcoin (BTC) may go through a market correction stage due to the unexpected boom on April 1st. The coin is now hovering around 5250 USD. According to Bitcoin price projections, We predict the coin to rise further to 5400 USD before facing a resistance. The resistance should be somewhere around 5400 USD to 5500 USD. Then the market will go stable. By the end of this quarter, the price of each Bitcoin should be 6800 USD. The market is very bullish on both the medium term and long term outlook. The value it lost during the crypto winter will be back gradually in the coming times.

We advise the short term investors to wait for another 200 USD gain before selling their holdings. Long term holders and medium term holders are advised to hold their coin for a longer period; it can give them more than 100 % profit.

Dash (DASH) Price Analysis: Will Dash Coin be Able to Stand after the Sudden Fall?