Bitcoin Cash is a blockchain based currency introduced in the market in 2017 as a hard fork of Bitcoin. This peer to peer digital currency enables convenient, hassle-free transactions and is taking the Bitcoin vision forward. BCH or Bitcoin Cash allows users to transfer a small amount of money by paying a nominal fee in a secured and faster environment. Since its inception, the coin has already been adopted by major merchants & businesses to process their microtransactions through a reliable network. The innovative currency was launched to support Bitcoin and claims to have over 478558 owners of the Bitcoin Cash block. The community is growing with each passing day and solidifying BCH’s position in the market. 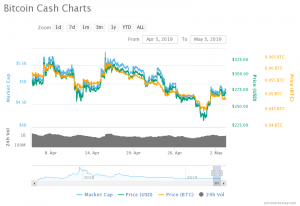 Bitcoin Cash is growing exponentially in adoption and usability. And this will put an end to the downward trend very soon. Last year, the company had partnered with Microsoft Corporation to promote BCH trading & investment. At the beginning of the year 2019, BCH partnered with the Japanese giant Alliance Cargo Direct. Recently, in March, the company (Bitcoin.com) also partnered with Jeju Blockchain Smartcity Association to promote BCH. The collaboration is a step towards promoting the adoption of BCH by local startups in Korea and nearby areas & then later it takes to the global markets. Additionally, Avnet, a leading tech company has partnered with BitPay to accept Bitcoin and Bitcoin Cash as a suitable form of payments and promote blockchain technology. According to BCH Predictions, the crypto market revives, the price of the coin can reach as high as USD 500 by the end of 2019. It has all elements to sustain the fluctuating waves of the crypto market and can be predicted to cross USD 1000 in the next 2 years.

TANGLE Can Become The Gamechanger For IOTA (MIOTA) In The Coming Quarters; Price To Shoot Up By June

Will Stellar Lumens (XLM) Come Out Of The Closet In 2019 And Solidify Its Position?