Forked from Bitcoin in August 2018, it is the 4th largest cryptocurrency in the world. It was actually created for overcoming two challenges of Bitcoin- Scalability and Transaction Fee. BCH can make numerous transactions per second compared to BTC, and its transaction fee is approx. $0.125 compared to BTC which is approx. $1.31. BCH is much more lucrative to the miners, so in future miners can be attracted towards BCH than BTC. The coin just after getting launched started taking steep highs. It was launched with a value of $250/coin, but, the next day, it went up to $651/coin.

Price analysis of BCH with the help of BCH charts 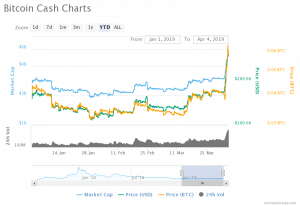 A few months back, BCH Hard Fork occurred, and since BCH ABC won the harsh run, these two actually are combined together to develop a single entity. Very recently, a new tool has been developed by blockchain.com, especially for crypto enthusiasts. It provided a better understanding of the intricacies of their digital currency. They launched a BCH explorer which benefits people search for transaction addresses, hashes, and blocks on BCH blockchain. The next major hard fork is going to occur in May 2019, and it has already paved huge expectations to the crypto communities.

BCH is a very promising cryptocurrency whose value in spite of the great volatility is towards a bullish trend. It can be considered as a good option for long term investment.