Bitcoin is the market leader for sentiment rather than a reason. This sentiment has created a true value of Bitcoin in the range of $100,000. Whether or not it is achievable in the years to come is a question in value investor’s minds. But for BTC believers achieving $100,000 is on the clock. Recent buying at long term support levels has pushed it more than 35%.

Bitcoin Price is justified by the huge buying action in the last one week starting from July 21, 2021. Without showing any sign of weakness, a higher trendline, increasing RSI, increasing volumes have created a very strong bullish sentiment on this counter. 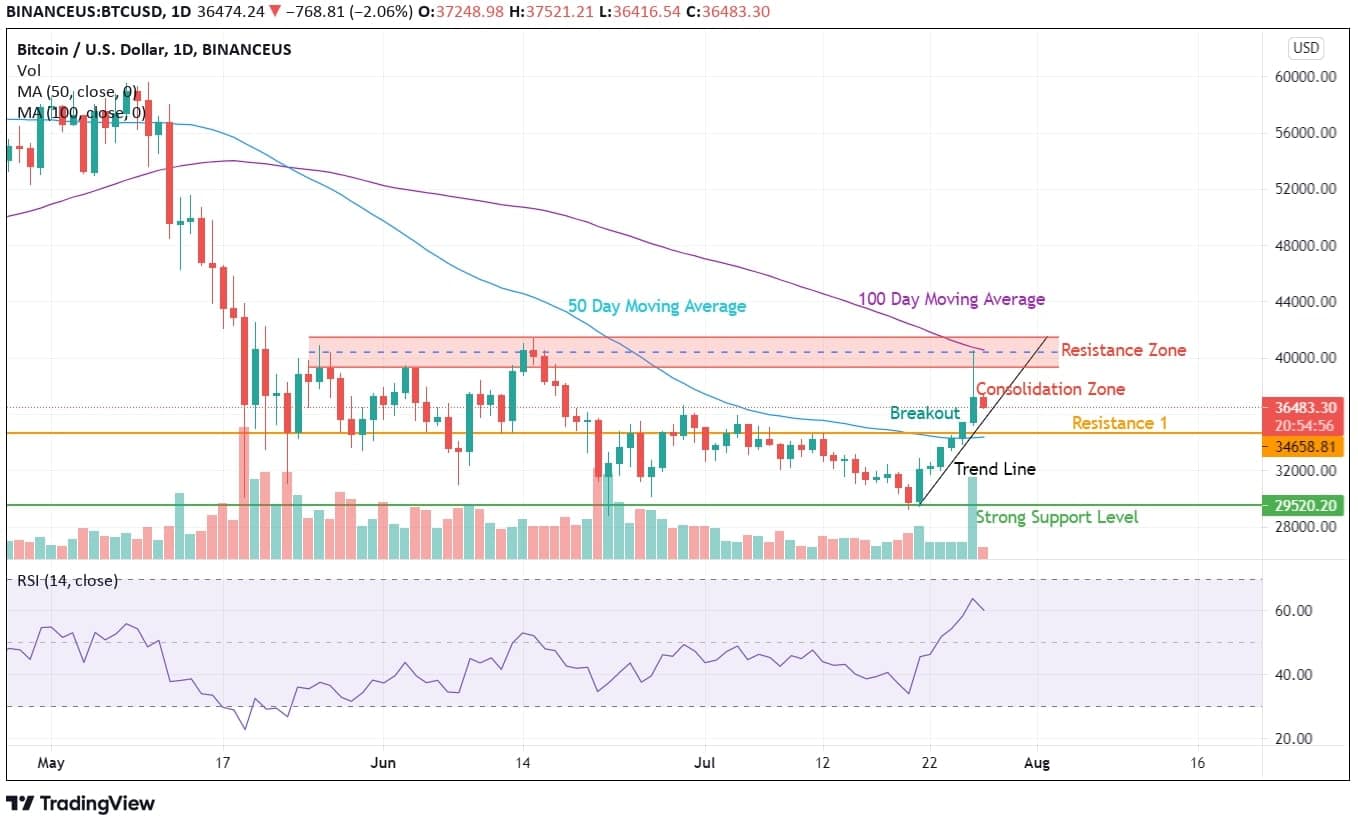 BTC has finally broken out of its shell. The spectacular positive move from the lows of $29295 to the high of July 26, 2021 of $39764, has given an ROI of 35% in seven days. The up move was initiated after the profit bookings of greyscale premiums were unlocked.

As of now, Bitcoin is in a much better state, as compared to two months ago. BTC has just one more resistance to clear for the continuation of this bull run. This consolidation zone ranges from $39,000 to $41,500. Breaking the levels can create a huge upside momentum for BTC as more and more people have started to buy Bitcoin as they missed buying at lower levels.

The earlier resistance of $35,000 will now act as support from any profit booking or negative retracements. On indicator level, RSI has reached close to the overbought zone for the first time since April 13, when it hit a high of $63,000. Support can also be measured by the 50 day moving average, while the 100 days moving average line will act as resistance before BTC breaches it.

On the downside, we can witness a profit booking induced selling pressure around $40,000 levels to continue for one more swing before it can breach the resistance zone. Bitcoin has some support around the last breakout zone of $34,500 to $35,000. These levels can create another positive swing. On daily charts, BTC had a spectacular momentum on July 26, 2021, making a gain of over 17.56 % in intraday trading. Although the profit booking at a higher level has pushed it back, BTC will rise again in an attempt to breach the $41,500 zone on the next swing.

Once the 100 DMA and $41,500 level is breached, BTC will again reach uncharted waters, which will be highly receptive to any good news to escalate the price to new highs. However, breaching the 100 DMA is highly unlikely without some consolidations as per our Bitcoin projection. 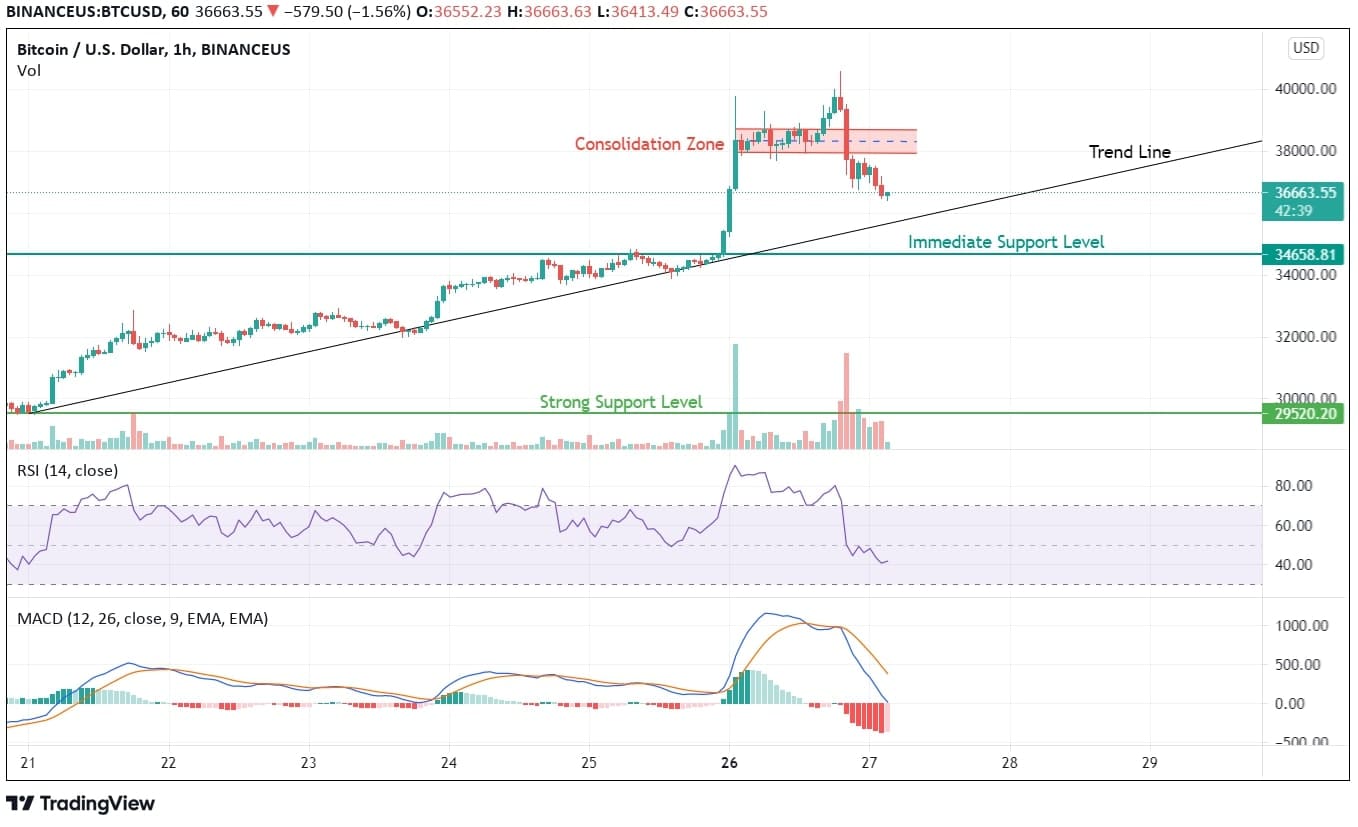 On hourly charts, BTC has shown an ultimate sign of bullish movement. After taking support from $29,500 it slowly closed towards $34,500. But further momentum was brought by strong buying candles on hourly charts that indicates a clear breakout pattern. While BTC has been consolidating on hourly charts for the last few hours, there is a strong sign of further upside momentum after BTC gives an upside breakout. This consolidation zone is further in alignment with the resistance zone on daily charts from $39,000 to $41,500.

The current MACD swing has ended in a profit booking. As long as the price action supports this trendline, we are good to go. Moreover, the consolidation zone was breached by a single hourly candle. BTC will have some stiff resistance in closing above this consolidation zone. On volumetric charts, we can clearly see a steep rise in selling volume just as big as the breakout volumes, indicating the entry and close of some large trade.

Bitcoin has the potential to provide an upside breakout and push the value across $50,000 in a short burst. RSI has moved towards neutral zones from trading in the overbought zones with increased selling volumes on hourly charts, indicating some profit booking. We can expect another positive swing from the trendline levels in the coming days. A breach of this trendline will indicate the return of negative sentiment.