Bitcoin is the most popular and widely recognized cryptocurrency. It allows peer-to-peer transactions in a decentralized protocol. The best parts of this crypto are:

It was launched anonymously in January 2009; now, it is a globally traded currency with a trading volume of over ten billion dollars per day.

Though there are various different regulatory advice in other countries, El Salvador is the first country to choose Bitcoin as real money.

It is mainly used to transact money outside the traditional financial systems. You can use Bitcoin for international payments because it is a faster, secure mode of payments and offers low transaction fees.

Later, when Bitcoin becomes more popular, it becomes difficult to transfer lower values because of the huge price rise of BTC. Now it is treated more as a commodity than a currency. 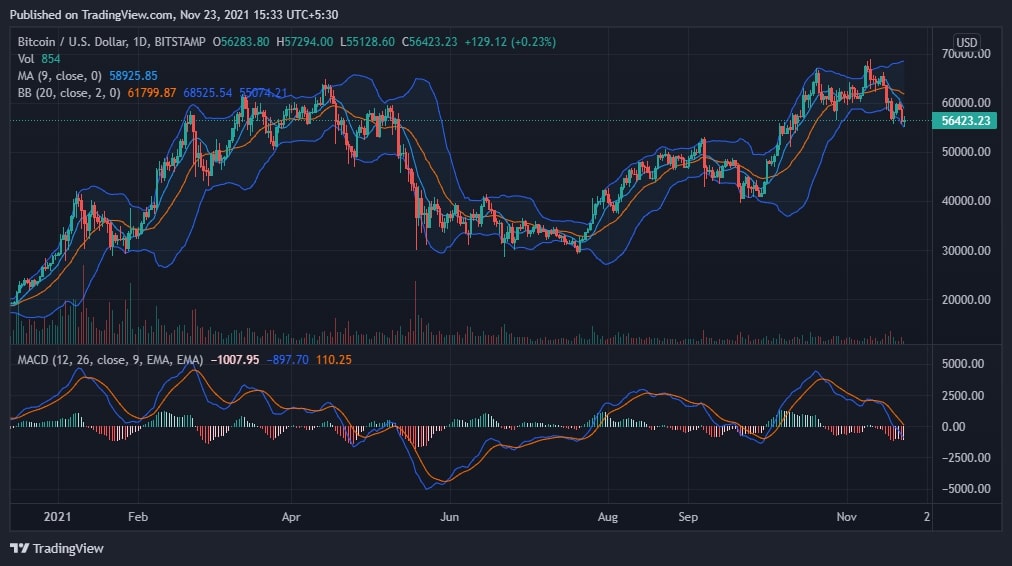 At the time of writing this technical analysis, the Bitcoin price is trading around $56900. Bitcoin is creating a new support level around its previous resistance level. It has already broken the previous support level of $60K. If it comes down further, BTC may lose its value to $50K as per Bitcoin price forecast.

The interesting part is, it is creating an M shape, which is not a bullish sign. Besides that, it could not cross the resistance level of around $67000 twice. The price chart looks like Bitcoin price will consolidate and may not cross new ATH soon.

However, many experts are of the opinion that this year BTC will reach $70K, and next year, it will be around $100K. Presently, analyzing the daily chart, we think BTC may not create a new ATH this year. However, you cannot predict the exact price levels.

On the daily chart, RSI is strong at 40, but MACD and Moving Average lines are bearish. The blue line of the MACD chart is far lower than the red line. The same is for Moving Average; the line is going downwards with the price.

Bollinger Band is also bearish. On November 16, the red candlestick crossed the BB baseline and made a downward momentum. Now all the candlesticks are forming below the baseline.

Bitcoin is a popular currency, and it will not consolidate for a long time. However, if you are a new investor waiting for a correction from the $67k level, you can start the first investment on BTC as per the Bitcoin price forecast. However, you may have to wait for a couple of months to get a return on investment.