Bitcoin (BTC) that was growing and making investors buoyant, to nudge $6000 mark until yesterday is now witnessed lingering around $5895 going as low as $5795 in the span of the last 24 hours.

Though not great as the current hike created by the price of Bitcoin that is lingering at around $6000 but a decrease of 1.28% is noticeable before the next milestone that is yet to be achieved. 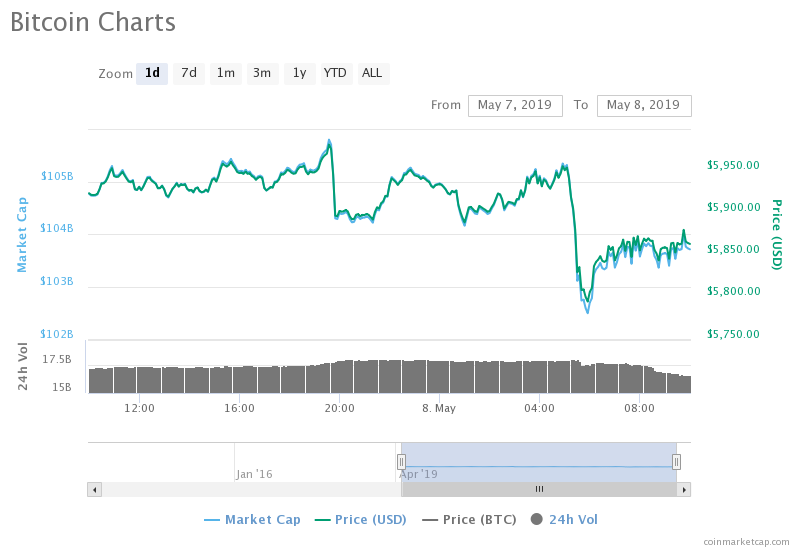 It was yesterday when the predictions were enough to make investors happy of their potential investments in Bitcoin but what do we observe today? It was in the span of 10 hours from the last 24 hours when the Bitcoin price was swinging between the $100 change from $5895 to $5795. Does it hold any alliance with the Binance hack of 7000 Bitcoins?

The question is not likely to hold the total connectivity with the fall because the market is volatile enough to support this undoing.

As per the BTC forecast chart above by Coinmarketcap, on 8th May at 4:30 UTC time:

Until the greater half of the day, the price of Bitcoin was ranging above $105 billion Market Cap and came to a range between $102 billion to $103 billion with the lowest price (USD) of the last 24 hours.

Binance had a major hack of 7000 Bitcoin with around a loss of 40 million USD due to its weak security maintenance but the price is not likely to have a homologous with it as we constantly see such volatile movements irrelevant of any scams and hacks taking place.

Payments in Trezor Wallet Now Possible with Bitcoin and Monero; Thanks To GloBee