The rise in interest and acceptance of El Salvador as their official currency was pushing BTC above the support levels, but the new possibility of being used as a currency for buying Tesla’s has created a huge impact on BTC. With some more positive news, Bitcoin price can move ahead to test all time highs of $64000.

Elon musk has again created a stir in investor sentiment as far as cryptocurrency is concerned. Crossing the $40000 levels will be a deciding factor for BTC in the near term. Energy usage and gas fees are a concern but if the world moves towards clean energy to fuel the crypto mining activities, there can be a huge rally in these assets. 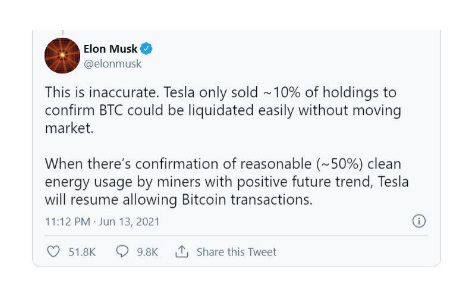 Elon Musk finds it hard to stop himself from tweeting on cryptocurrency even after being threatened by the renowned hacker group, Anonymous. His tweets have once again changed the entire market sentiment in Bitcoin. In response to allegations by Sygnia CEO about Musk enforcing pump and dump in cryptocurrency assets, Elon responded by saying that – “Tesla only sold 10% of its BTC holdings to confirm its liquidation time. He also assured that above reaching a threshold of 50% clean energy Tesla will resume accepting BTC. 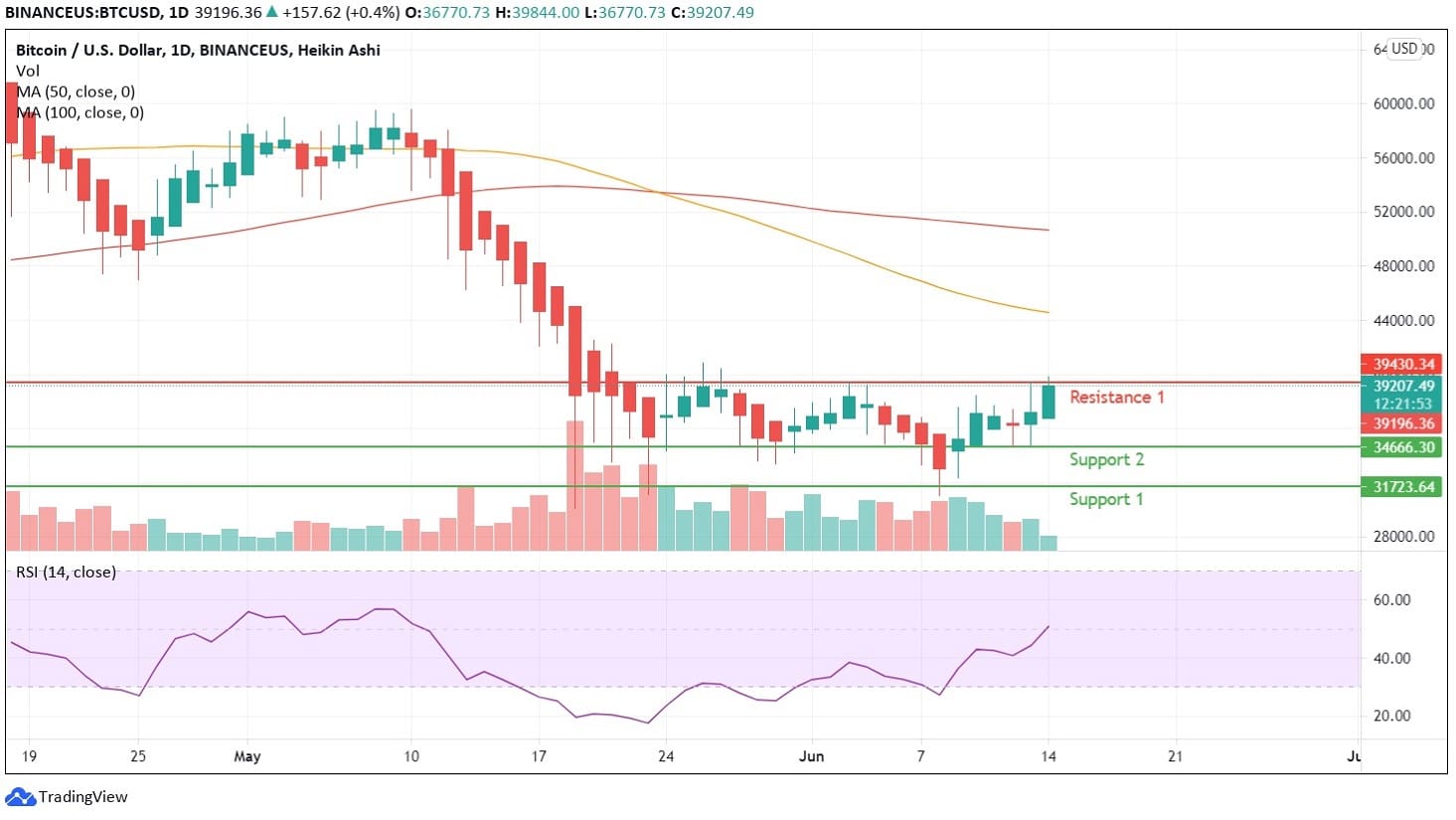 Bitcoin is showing a change in polarity with a large marubozu green candle on Heiken Ashi patterns. Once BTC crosses the immediate resistance of $39500 the next target would be the 50 day moving average placed at $44409. The follow-up green daily candle on this chart pattern would indicate a clear possibility to test the long term resistances in a bid to trade above them.

With rising RSI and falling moving averages, there can finally be a scenario where BTC returns to its former glory. Increasing volume is also an indication of bullish sentiment. So far, it has been consolidating in a negative zone for the last one month. 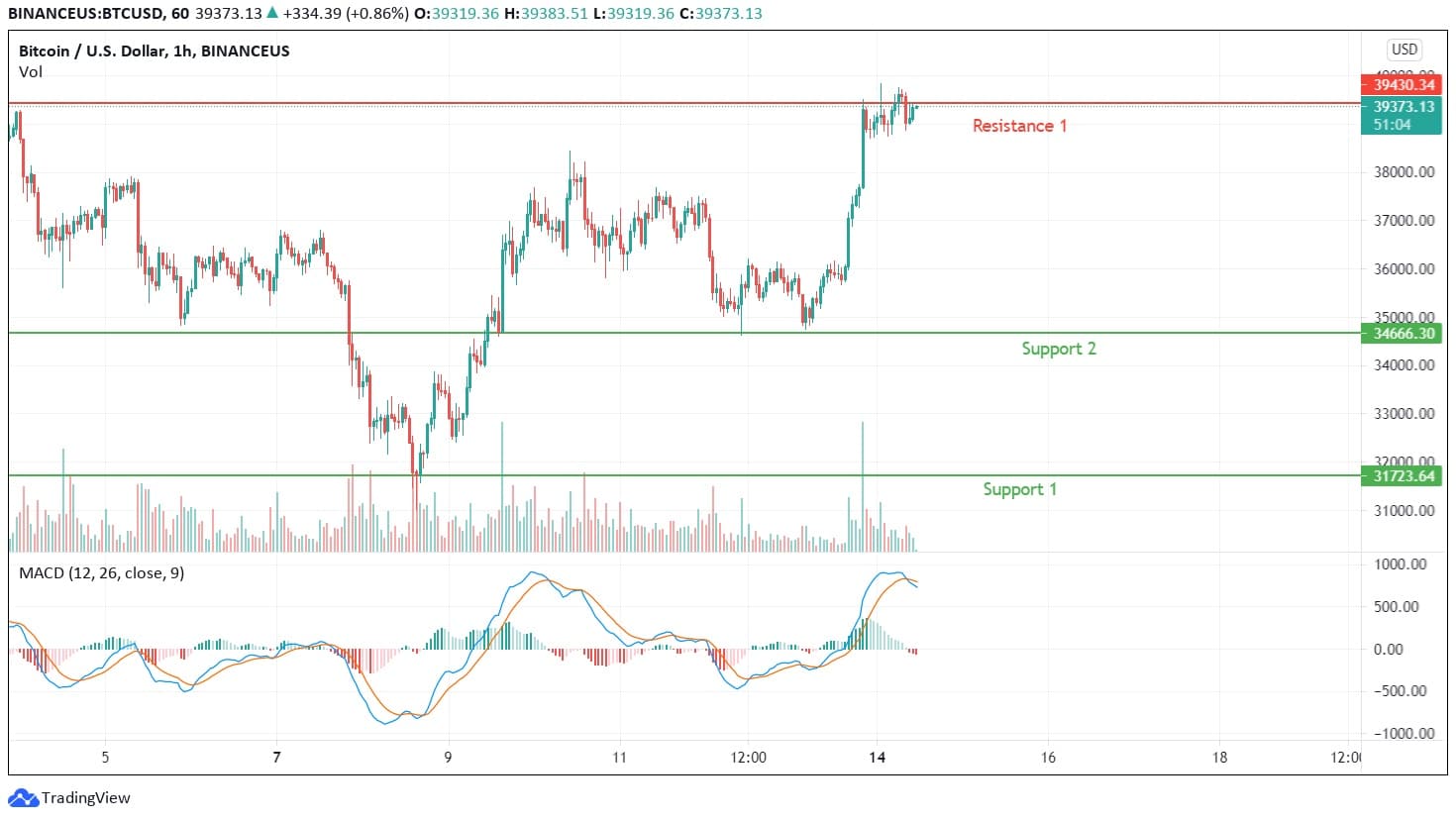 Bitcoin has been respecting its long term support level of 31700 and shows slight signs of a positive up move. Even though the market move in the last couple of hours can be credited to the tweet of Elon Musk, BTC is still trading in a consolidation zone. Currently, the near term support is actively pushing the chart in red from $39500.

Once Bitcoin overcomes this resistance, it can move to test bigger resistances. Overall the short term positive sentiment could give BTC a much needed push to accelerate above the psychological $40000 mark. MACD on the short term chart is creating a negative sentiment, which could be due to the consolidation in the last eight to ten hours around $39500.

Volumes have also increased significantly and over 412 bitcoins were traded on BINANCE trading platform. These signals are acting as a combustion fuel to push BTC to new highs for the month of June. Closing above $40000 will be a clear indication of returning investor interest on this crypto asset. 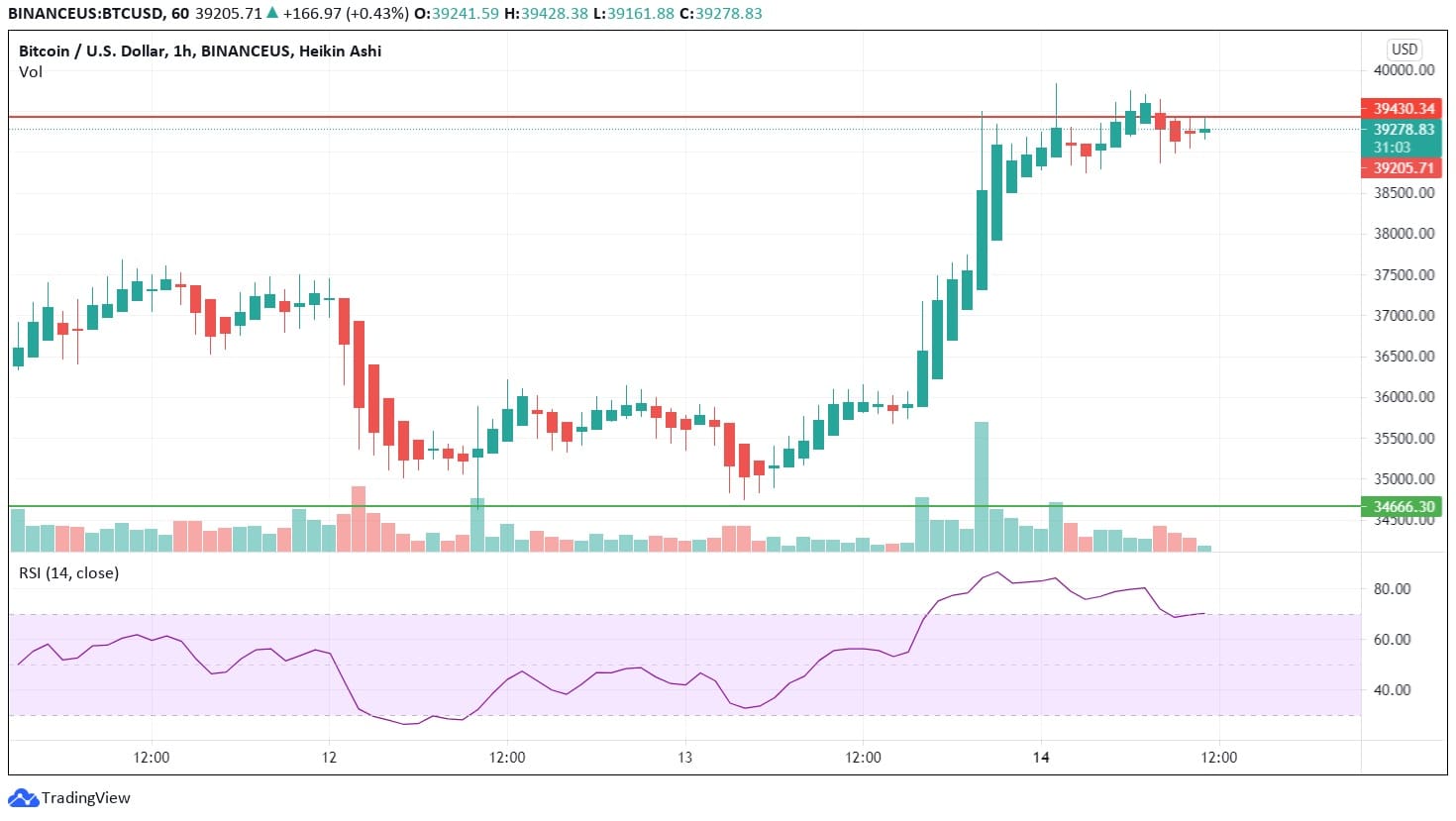 A clear and visible positive move in BTC cryptocurrency valuation can be seen in the last 24 hours. There is not a single insignificant or confusing candle. Bitcoin is facing some resistance at $39500, but this resistance consolidation is a sign that investors are still trying hard to surpass this level.

According to our Bitcoin predictions, the latest red and green candles are creating a spinning top pattern which indicates that there is an ongoing battle to move this counter to red or green. BTC will be a good buy at support levels of $32000 and once it crosses the $40000 valuation on daily charts.

Till then fresh positions should be halted. The rally caused by Elon’s statement has pushed BTC in overbought zones and RSI is indicating a histogram of above 70. These signals indicate a positive ambiance but there needs to be some profit booking to reach beyond $40000.