Bitcoin is a decentralized digital currency that utilizes blockchain technology to facilitate peer-to-peer transactions. Unlike fiat currencies, which are issued and controlled by governments, there is no central authority controlling the supply of Bitcoin.

One of the main differences between Bitcoin and fiat currencies is that the former has a limited supply, with a maximum of 21 million Bitcoins available for mining. In stark contrast, central banks can print fiat currencies at any time, which is a leading reason behind inflation.

Another difference is that Bitcoin transactions are recorded on a public ledger called the blockchain, which allows for transparency and immutability. Bitcoin also allows for increased financial freedom, as it is not controlled by any government or institution and can be sent and received anywhere in the world with an internet connection. Since BTC is not actively accepted by merchants and businesses and is banned by numerous countries, the adoption rate for BTC is still low compared to traditional currency.

Bitcoin has undergone a similar uptrend rally as other tokens, which confirms a fresh round of buying rallies in 2023. BTC has reached a market capitalization of $350 billion for the first time since the breakdown of November 2022.

BTC price action has witnessed a massive uptrend, with the positive breakout coming after its uptrend displayed in the regression trend. At current levels, BTC is trading very close to the 100 EMA curve or slightly above the same. With buying support from the current level, BTC could easily scale up to its next resistance at $21400 and above. Will Bitcoin succeed? Click here to know! 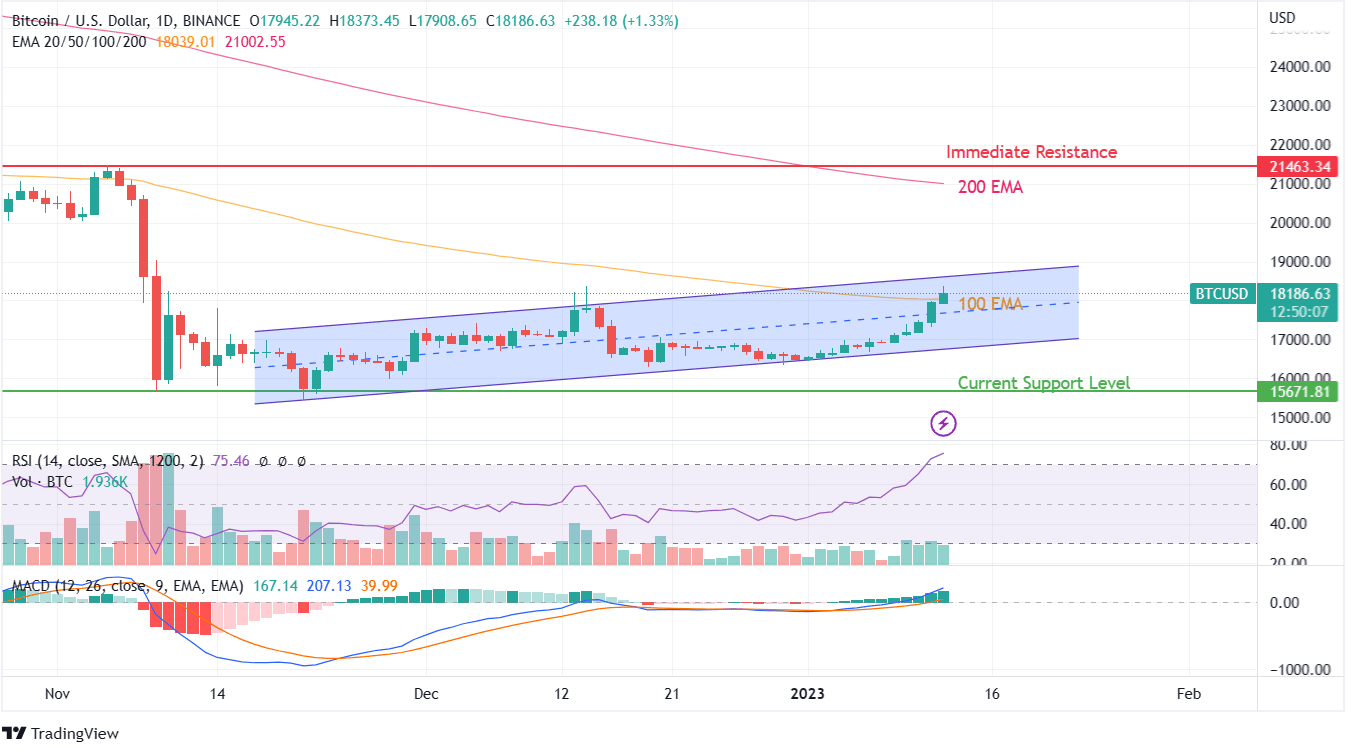 In comparison to the behavior of BTC near the $18000 level in the earlier stance has finally supported the token in a short breakout. With respect to the parallel channel, the trend seems to be strongly bullish, but ideally, one should wait for BTC to surpass the upper curve of the parallel channel to consider it a bull run confidently.

Retracements and profit booking are a common culture of cryptocurrencies, and when it comes to Bitcoin, a rally here could trigger a massive uptrend in the wider crypto markets. BTC’s next prime resistance would be the 200 EMA curve, currently trading in the vicinity of $21000 along with $21500. Hence a velocity can be expected to turn into mild profit booking at these levels.

On weekly charts, Bitcoin should face resistance at $18400, $22000, and $24500. Hence one should be aware of the opportunities to make fresh entries and ride the bull run. RSI for BTC has entered the overbought zones of 75.

Hence, technicals can’t yet be trusted at this point but are entering at current levels. One should remain alert to any major selling scenario developing around the token. Transaction volumes on BTC are yet to reach all-time high levels.