With Bitcoin’s market capitalization still being larger than the combined value of the top 8 cryptocurrencies, the dominance of BTC can easily be threatened. Bitcoin is considered the original and most well-known cryptocurrency since it has been around since 2009.

Bitcoin is a highly stable cryptocurrency with a more established user base. BTC had immense volatility in terms of price action, but these price fluctuations have recently become more steady.

2023 has so far sprung huge positive sentiment taking the value of BTC from a mere $16500 to $21450 in the first sixteen days only. Although the day began with fresh highs of $21450, as the value is close to the 200 EMA curve, price action has started to consolidate. Buyers of dip will attempt to take advantage of this low value without failure. Hence, there could be some profit booking near key resistance levels.

Bitcoin now holds a market capitalization of above $400 billion, a positive trend has begun, and new highs could be created with the growing acceptance of cryptocurrencies as tender.

BTC value has spiked this weekend, but buyers would be positioning themselves for a fresh round of positive action even with the risk of higher volatility. The candlestick pattern in the last two days has been red, which highlights the plight of investors fearing a trend reversal. Will Bitcoin reverse from 200 EMA? Read our Bitcoin forecast to know! 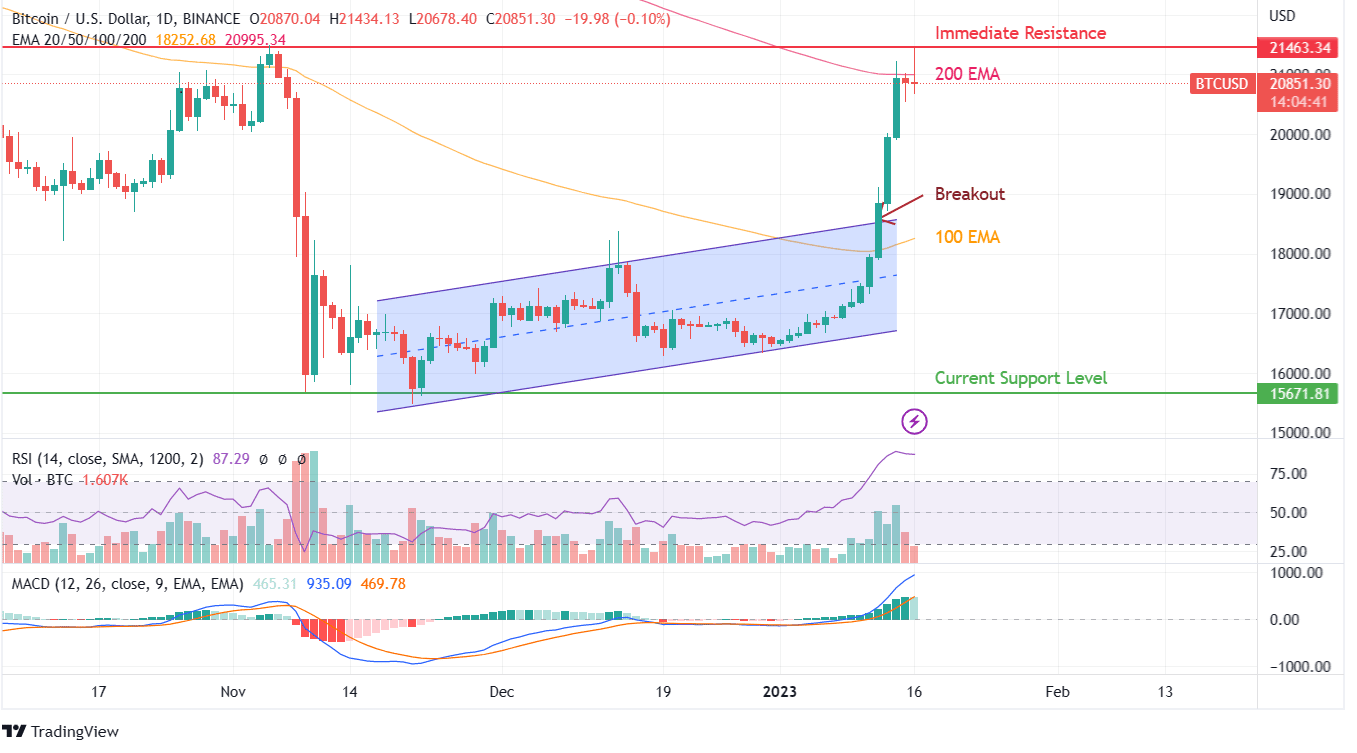 With the positive trend breakout pattern generated on January 12, 2023, the outlook for BTC showcases the confidence of buyers and technical indicators. RSI has moved way beyond overbought zones, while MACD has created a huge gaping difference.

The breakout trend was supported by the positive reaction of traders from the 100 EMA curve, with the combination of a buying spree. Even with the immediate resistance of $21,500 facing trouble, BTC shows positive confidence in the future. Although there have been instances of selling at 200 EMA, the red candlesticks remain in close vicinity to the 200 EMA curve.

On a weekly candlestick pattern, the price action of the second week of January carries a high resemblance to the red candle of the second week of November. Since the resistance of $21,500 has weighted heavier during the bearish cycle, a positive breakout is expected from the current scenario. On the further up move, resistance action would also be visible at the $25,000 and $30,000 marks.