Bitcoin has become an outstanding example of quality development over time. In recent years, BTC has tested multiple highs and lows, but its rise from four digits to five digits has been extraordinary. Bitcoin analysts have considered it more of a storage value over a utility token.

Since many miners and users utilize BTC despite its slow transaction rate, it has aided in the expansion of its ecosystem. Whether or not BTC will have a future in the coming years still ravages investors sometimes since most new cryptocurrency tokens are based on Proof of Stake and Hybrid.

It’s not the fastest or most secure but has the largest market capitalization, which was possible only because of a more prominent belief in its ecosystem. Despite falling from its peak of $69025, Bitcoin has recouped over $10,000 since its lows around $32,000.

What could have been a breaking level for BTC? Has it instead evolved as a good buying level for long-term growth? At $42,457, Bitcoin is worth a little over 800 billion USD, which is close to thrice the value of ETH. From a technical standpoint, BTC is under a consolidative sentiment with $30,000 to $35,000. The outlook is positive in both the short and long terms.

With a positive outlook and lower wicks on monthly candles, buying sentiment rises. The daily chart shows potential for BTC to break out of its consolidation zone and re-attempt to take $50,000 levels. The uptrend movement should continue in the coming days with a potential breakout. 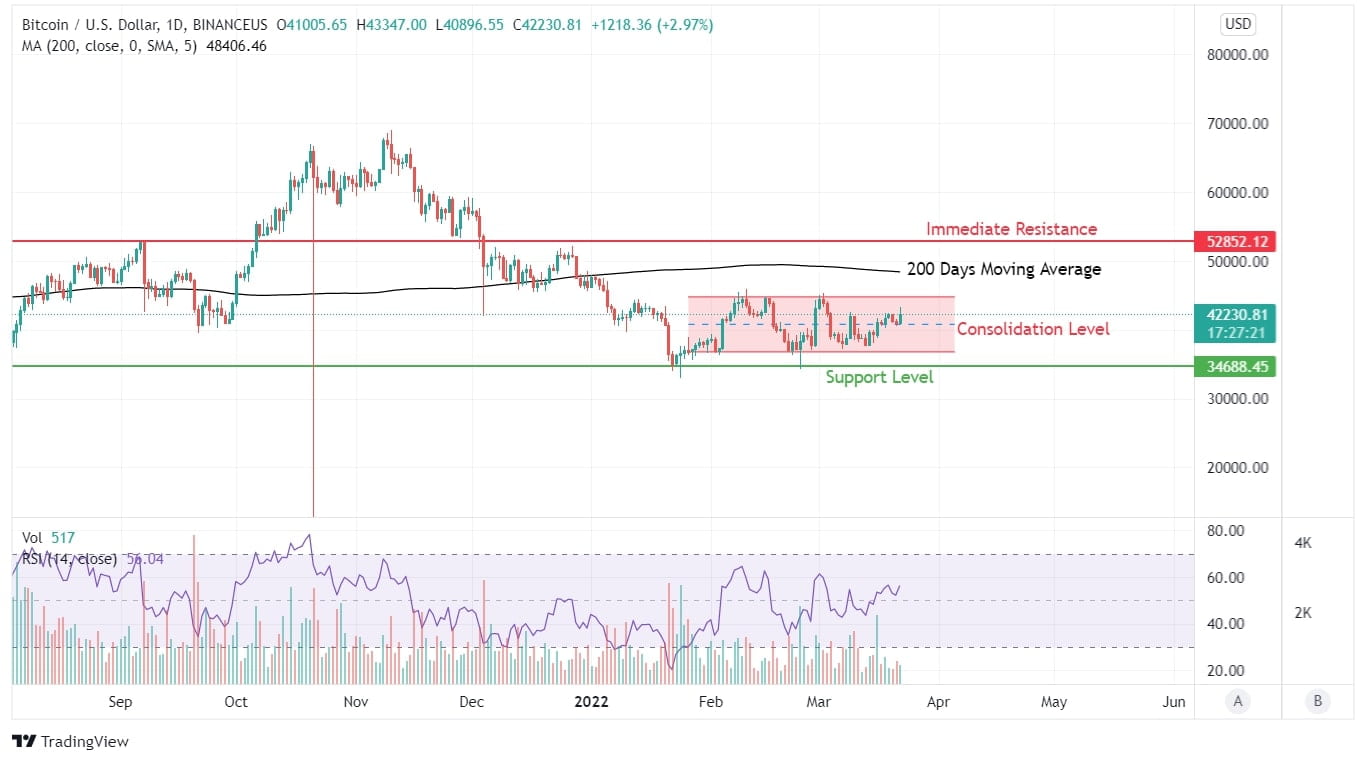 Bitcoin halted its downward movement from its previous support levels active around $30,000. Since the bounce back from similar levels, BTC has been moving upwards with a ferocious movement. While the downtrend broke its psychological support of 200 Days Moving Average, it barely fell 20% under this level.

Buying from the $32,000 value indicates a strong possibility for this price trend to continue in the coming days. With the increase in value, the relative strength index has also taken a revival shot by going up to 60 from 30. At this point, the 200 DMA curve remains just 12-15% away from the current value of $42,457.

Bitcoin might take a few more attempts to reach $45,000, but it will most certainly be breaching the 200 DMA level and take support from the buying trend to move upwards or fall back to the $40,000 levels. Find more details about the Bitcoin future predictions here!

On monthly charts, Bitcoin is facing resistance across $47,000 levels. The support from its halfway mark offers an opportunity for investors to make a quick buck as BTC is attempting to overcome its 200 DMA resistance level. Compared with the 2022 price trend, Bitcoin is replicating the transaction volume and price trend of 2021. Hence, achieving a six-figure digit could be possible in the coming years.