With the passage of time, many developers of original Bitcoin (BTC) felt that the vision with which it was launched has diverted and in order to set it right and make the king of cryptocurrency, what it was meant to be, Bitcoin SV (BSV) where SV stands for Satoshi Vision, was launched. Bitcoin SV allows users to transfer a big chunk of data, that was originally expected from the Bitcoin. Further, the management is planning to conquer blocks of 512 MB and 1-2 GB in size this year. As the size increases, new boundaries of space will open up and will attract new developers and users, resulting in intensive growth of the ecosystem. Extensions of Bitcoin SV (BSV) including Bottle BSV, BitPaste, Bitstagram, Bico.media, and BitcoinFiles.org are working together to convert the Satoshi Vision into reality. 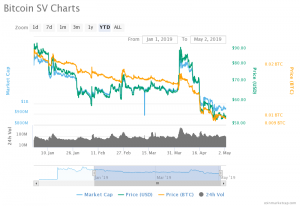 According to CoinMarketCap, at UTC 10:34, on May 02, Bitcoin SV (BSV) was placed at 14th position in cryptocurrency chart, with a return on investment of almost 40% but in negative. If you talk thinking about the trading volume in the altcoin, it was around 96,324,125 USD along with the compiled market capitalization of 954,289,807 USD. On top of that, the total Bitcoin SV (BSV) chips in circulation were 17,757,786, while each chip valued around 0.00987568 BTC against Bitcoin. When it comes to comparing the price of altcoins, making an analysis based on trading variation in 25 days is a standard procedure. So regarding that, on April 07, the crypto was trading at 86.41 USD; nevertheless, its value has declined by a huge margin in this period, and today at the earlier mentioned time, Bitcoin SV was trading at 53.68 USD, which is cumulatively 37.9% below the earlier level.

An important point to ponder here is that Bitcoin SV (BSV) is not the whale of the crypto pond. And linked closely with the trends of Bitcoin (BTC). However, over a period of time, the interest of investors has diverted from Bitcoin (BTC), which indicates the interest of buyers in altcoins. Just because of this reason, an uptrend is expected in the crypto. Another factor is the range bound nature of BSV/UDS pair. If you look at the majority of forecasts, there is optimism regarding the Bitcoin SV (BSV) and it is expected that by the end of 2019 Bitcoin SV will pass the $100 mark.

The Battle of Bitcoin (BTC) Vs. Gold Has Begun #DropGold Campaign

Bitcoin SV Lacks Support and Momentum; Turns Downsides Below $190 in the Intraday