BTC is a flagship product in the crypto industry and the first to make an everlasting impact despite its energy consumption becoming larger than countries. BTC’s adoption and acceptance by a large number of merchants have helped develop a strong ecosystem. Furthermore, the energy consumption is also adding miners to generate more income through mining rewards in the form of BTCs.

The con of this cryptocurrency is feeding a large population of people. Bitcoin thus offers multiple modes of making money, either by mining or by directly buying its currency. BTC is now worth more than the remaining top two cryptocurrencies. Comparing the ecosystem of Bitcoin gives a clear insight behind its success and rising value. BTC is currently valued at $1262 billion with a circulating supply of close to 90%. Bitcoin is currently valued at around $66,980.

After hitting close to $67000 on charts on October 20, the profit bookers came into action pushing the value of BTC down to $58,500 levels within the next week. Such a movement after hitting an all-time high was a result of the flash crash on October 21, 2021. The price has finally broken out of the consolidation zone and marked a fresh all-time high. 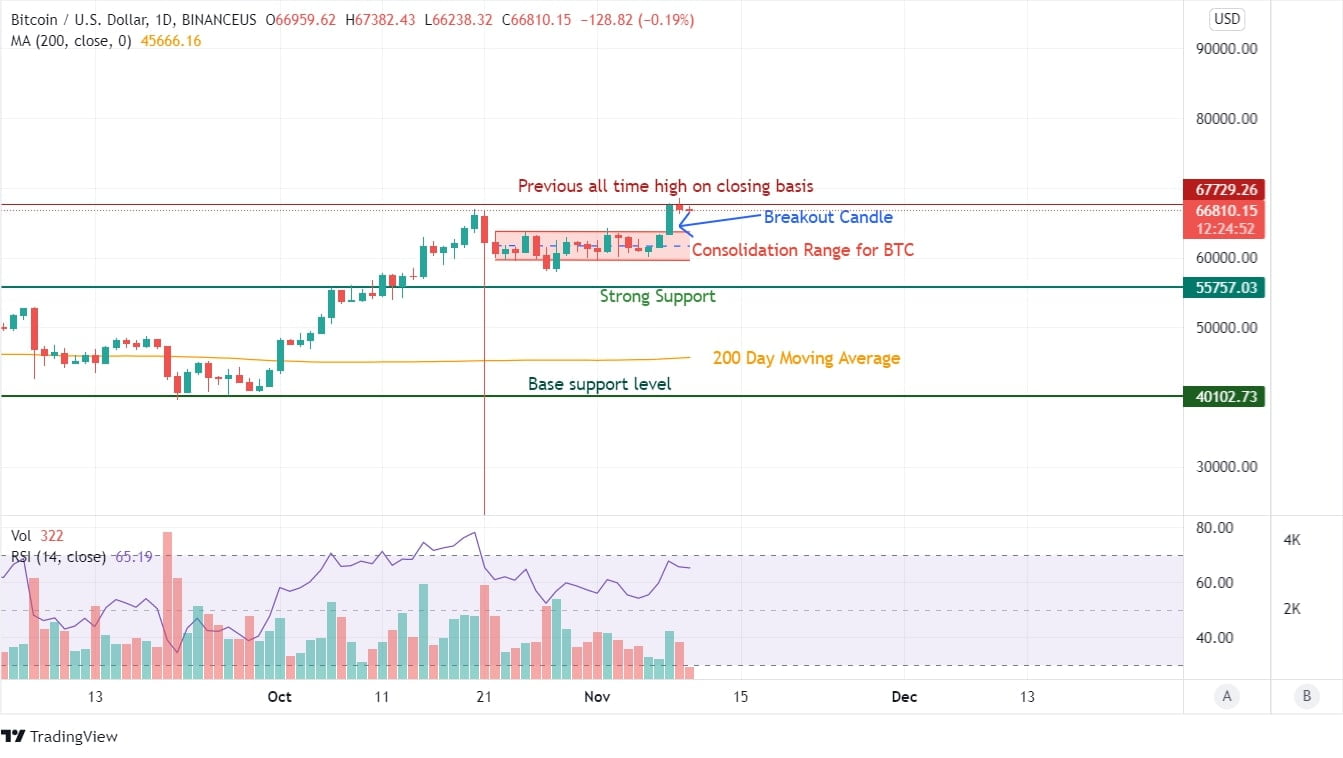 BTC entering a consolidative price movement was in favor of its sustainable value. Since the flash crash, the scope of further price disturbances has become a common thought hindering the growth-oriented trajectory of Bitcoin values. Only after a month of consolidation could BTC break from $64,000 level towards marking a fresh all-time high as per BTC forecast.

Historically, each all-time high being created close to the previous one has initiated a fresh profit booking sentiment. This time the story seems a bit different as Bitcoin will be taking support from the upper limit of the previous consolidation, which comes to around $64,000.

Weighing in all these factors indicates the possibility of another all-time high, while this pattern ideally continues till BTC reaches $100,000 in valuation. While such a BTC prediction might have sounded too far-fetched, as of today, it seems like a highly possible probability.

IDOWALL Announces the Launch of the $WALL Token Seed Sale