BitShares is an industrial grade decentralized trading platform designed to perform smart financial contracts. BitShares has its unique market pegged asset called bitUSD, with one bitUSD equivalent to 1 USD and this is backed by two times worth of BTC as collateral and is automatically settled by smart contract to guarantee its redemption ability. BTS is also looking out to extend the innovation of blockchain to various sectors that rely on the internet to provide services. Benefits with this public blockchain- BitShares include biggest transaction capacity and the fastest confirmation time. It has proven to support 3300 transactions per second and 16000 operations per second with the potential to handle 100K TPS. 3300 TPS is equivalent to the combined transaction volume of Bitcoin, Ethereum, Litecoin, and Visa. 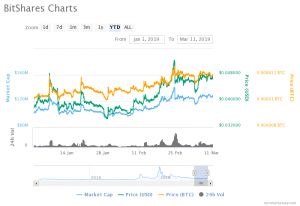 According to stats from Coinmarkcap, the corresponding market cap value of BitShares (BTS), the 46th cryptocurrency in the market, on March 11, UTC is $125,985,057 for its 24h volume of USD 4,892,700 which is relatively higher than its value of $105,468,115 on February 11 by 19.45%. The cryptocurrency’s market value started on a good note with the value of 101 million USD at the beginning of January which crossed 130 million USD on January 07. However, it dipped drastically after that and went downhill until February 08, with its all-time low on January 29 of USD 92,905,813 which is lower by 35.61% compared to present day value. Nevertheless, the numbers have been gradually increasing, with significant dips in between. The 20-day exponential moving average shows a declining trend. The numbers fell from $126,589,568 on February 19 to the present day value by a negligible 0.48%. However, the currency’s overall market is on a raise which gives the bulls an upper hand.

The 14-day Moving Average of this digital currency also exhibits a downtrend with Mcap value decreasing from USD 129,127,955 on February 25 to $125,985,057 (current value) by 2.43%. Although the percentage of both the moving averages are negative, their values are negligible compared to the rising overall market trend of the cryptocurrency. This exerts the bullish pressure on the market, and the cryptocurrency’s balance rests in favor of the buyers both- long term and short term investments. Investors would see a good profit if this market trend continues in the future. Similarly, traders investing in this cryptocurrency will increase the value of both the currency and their investment.