The Utter Failure of Iowa Caucus

In stark contrast to the successful model of Estonia, the utterly botched voting system employed in the Iowa Democratic caucus has cast doubts over the efficacy of blockchain-based voting applications. 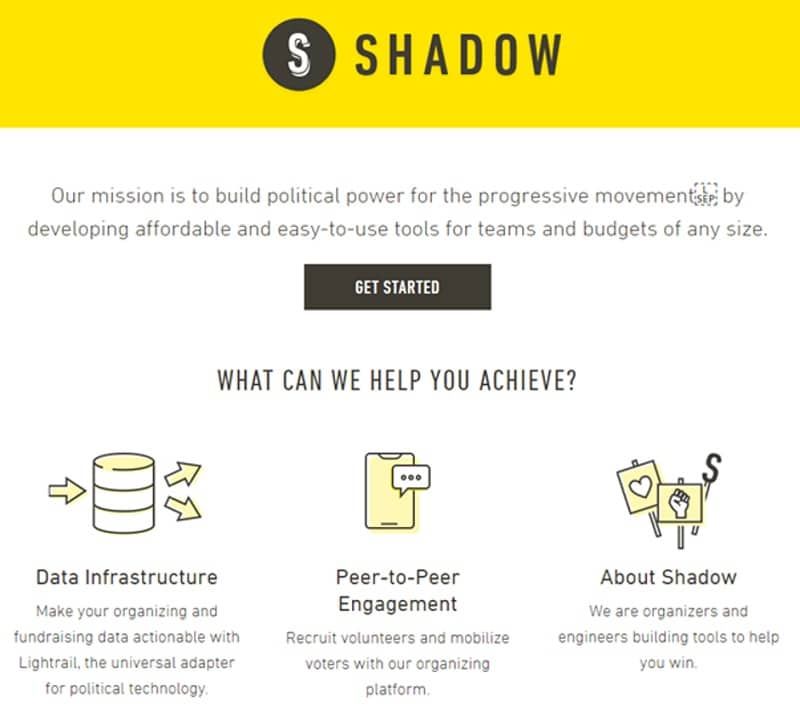 The app suffered from critical issues during the process, which caused delayed and inaccurate results:

“Throughout the long night, precinct chairs found themselves unable to get the app to work. Many never figured out how to download or install it in the first place. Those who tried to report their results via a backup phone line wound up on hold, sometimes for more than an hour.”

In a series of tweets, Shadow Inc. took responsibility for the coding bug that caused the breakdown:

We sincerely regret the delay in the reporting of the results of last night’s Iowa caucuses and the uncertainty it has caused to the candidates, their campaigns, and Democratic caucus-goers.

Prompted by the Iowa scandal, many experts have questioned whether mobile and blockchain voting applications are the best way forward.

Security moguls argue that online voting systems can be compromised by citing threats such as a variety of cyberattacks, including “server penetration attacks, client-device malware, and denial-of-service attacks and disruption attacks.”

In fact, a 2019 federal government report on secure online voting concluded that blockchain (as well as other niche technologies) had not yet succeeded in resolving crucial security issues inherent in any internet-based voting system. 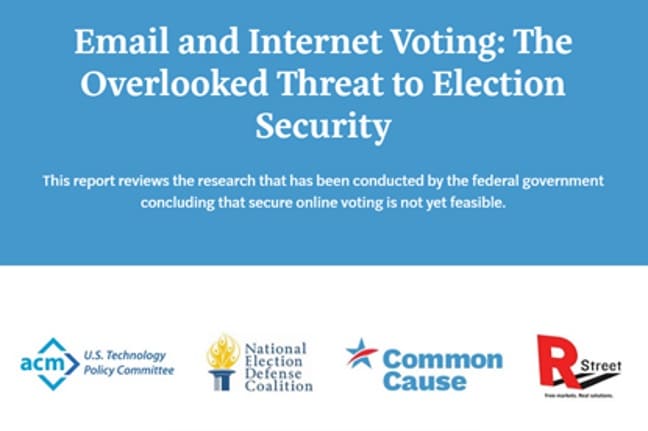 Co-author of the report and member of the U.S. Technology Policy Committee, Jeremy Epstein, wrote: “In this threat-filled environment, online voting endangers the very democracy the U.S. military is charged with protecting… If I were running for office and they decided to use blockchain for that election, I’d be scared.”

Therefore, there remain multiple challenges with blockchain-based online voting systems which need to address to achieve a seamless electoral process:

Elections, particularly those for government offices, must follow specific guidelines that cannot be compromised to preserve election integrity. Secure and anonymous voting is chief amongst these.

Blockchain-based voting is vulnerable to identity fraud in the absence of third-party authentication services or a fool-proof method of online identity verification. Moreover, people fear that glitches in the system can lead to their vote becoming public, thus compromising the secret ballot principle.

While blockchain has been used for many smaller-scale elections and absentee populations, many question whether it can be scaled to serve massive national elections with a much larger volume of voters.

The Need is Real: Outdated Traditional Voting Methods Are Unsustainable

Despite all the above-stated impending issues with blockchain-based voting applications, we cannot deny that there exists a genuine need for a secure and convenient voting system that fulfills the needs of diverse populations.

Traditional voting has many drawbacks: it costs tremendous amounts of taxpayers’ money and suffers from controversies pertaining to result authenticity. Moreover, voter turnout in some of the world’s major democracies, including the United States and India, is steadily decreasing as people find it difficult to travel to polling booths.

Blockchain has the potential to solve many of these issues. Firstly, it can allow people to cast ballots remotely. Secondly, the high degree of verifiability of blockchain platforms lets voters confirm that their vote was accurately validated without compromising privacy. Thirdly, it can help increase the representation of underprivileged groups, thereby impacting the size and composition of the voting populace. Lastly, blockchain voting can reduce election costs significantly.

Multiple blockchain platforms, such as Voatz and Votem, are working to provide systems that tackle issues related to trust, verifiability, and security. They routinely check and improve their systems, while working in sync with government departments like Homeland Security, to ensure that their voting platforms have a tamper-resistant security infrastructure.

The systems have been used for numerous state and private elections, albeit at a smaller scale. 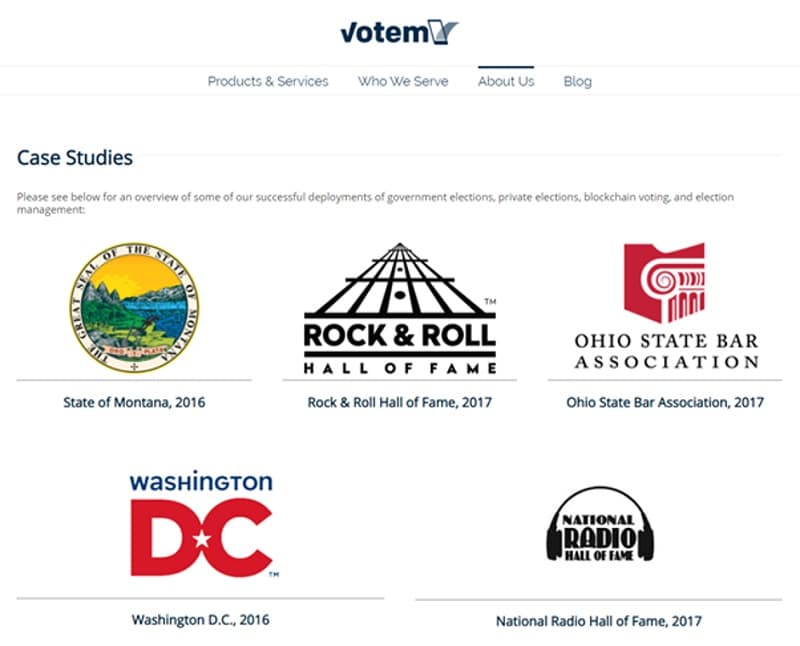 Consequently, there has recently been a surge in state-centric pilot programs employing blockchain-based applications for voting purposes across the international community.

Recently, India’s Election Commission (EC) announced that the country hopes to implement a blockchain-based voting system in a bid to boost voter turnout.

India routinely suffers from a low voter turnout: In the 2019 Indian General Elections, approximately 300 million registered voters (a third of the total number of registered voters in the country) did not exercise their democratic right to participate in the electoral process. 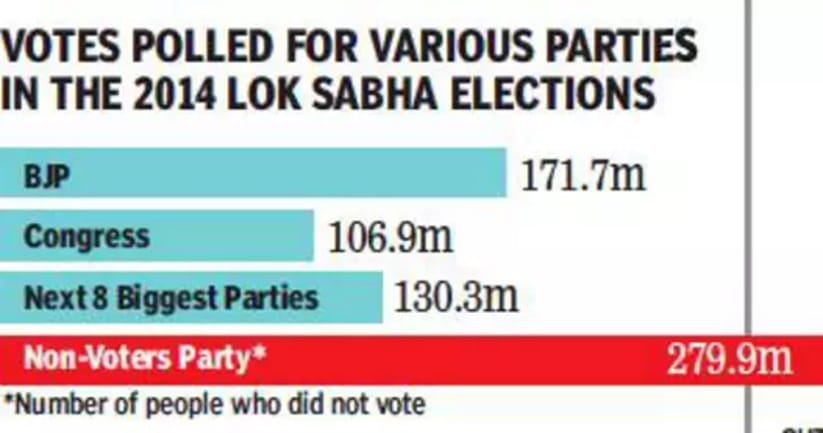 The announcement came in the wake of the recent New Delhi elections, which saw an even worse voter turnout.

The Delhi Assembly elections witnessed a sharp drop in the number of voters, with only 62.59 percent of registered voters casting a vote.

Although many are not sufficiently engaged in the political process, one key reason behind progressively lower turnout is migration amongst the younger population. 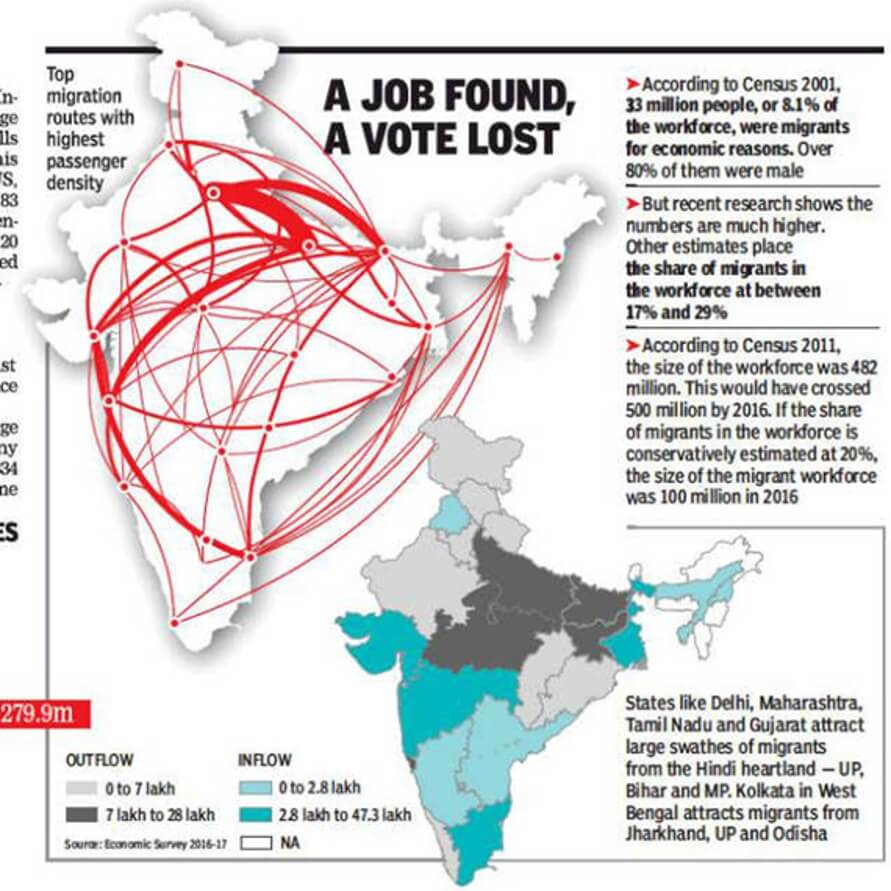 At a summit organized by the Times of India association, experts agreed that blockchain tech could help mitigate this problem and encourage voters who cannot reach poll booths on election day to participate in elections remotely.

Chief Election Commissioner, Sunil Arora, added that the EC would be bringing up a proposal to link voter IDs with Aadhaar-based biometric checks. This will help create a complete and near-perfect voters list, which helps determine the exact situation of electoral participation in the country.

Arora indicated the EC’s interest in pursuing a collaborative initiative, as he invited industry and political leaders to provide constructive criticism to help ensure that the blockchain-based voting system was tamper-resistant and protected electoral integrity.

In September 2019, Moscow announced that it would be initiating electronic elections in three of its electoral districts. The program ran in parallel to traditional voting mechanisms, allowing citizens who found it difficult to access the existing system, an alternative method of casting their ballot. 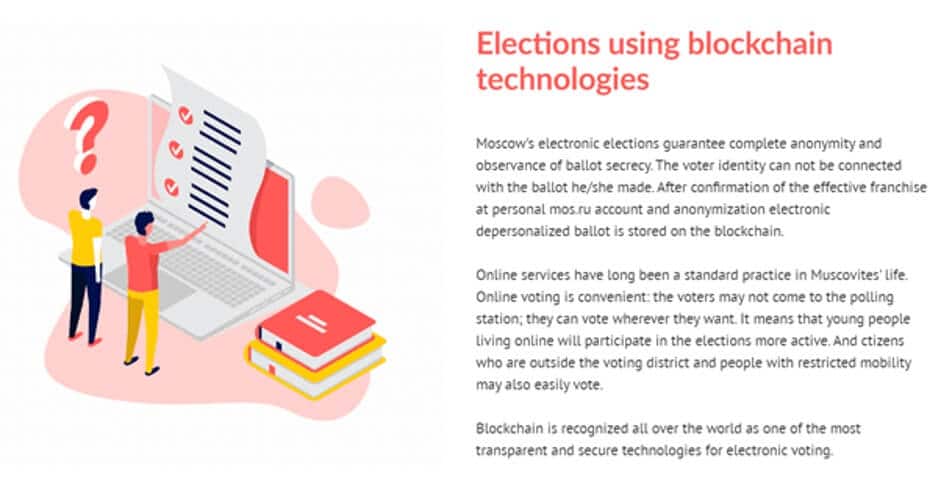 The Moscow Mayor’s website guided voters through the process of voting using their blockchain system and elaborated on how the process worked. It further added that the new system would bring a new level of transparency and accountability to the country’s elections.

Although hacking remained a threat, the website reassured voters by stating that since voting would be conducted on a closed communication channel, the probability of an attack was extremely low. 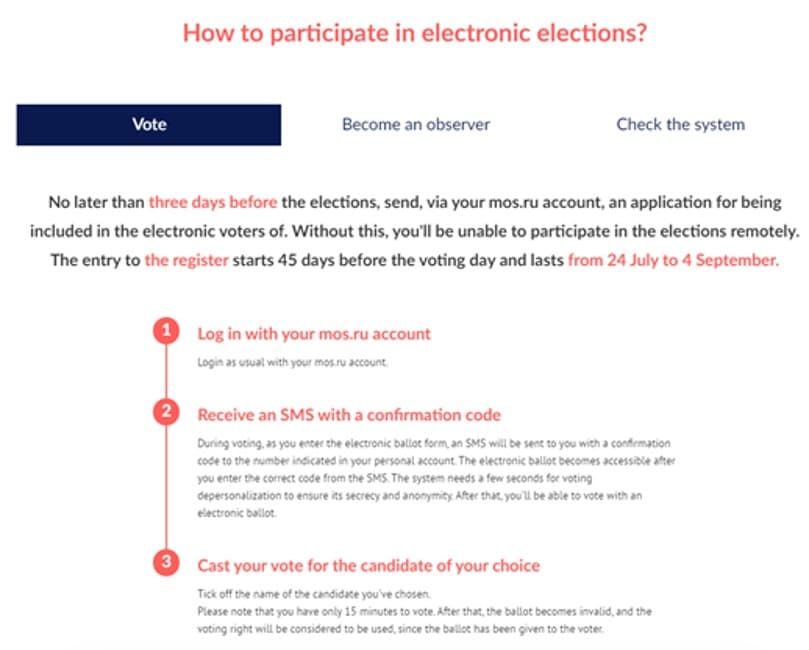 Estonia, a Baltic nation of roughly 1.3 million people, introduced the world’s first online voting system as a part of its comprehensive online blockchain-based governance platform, e-Estonia. It has widely been hailed as an ideal model for online voting. 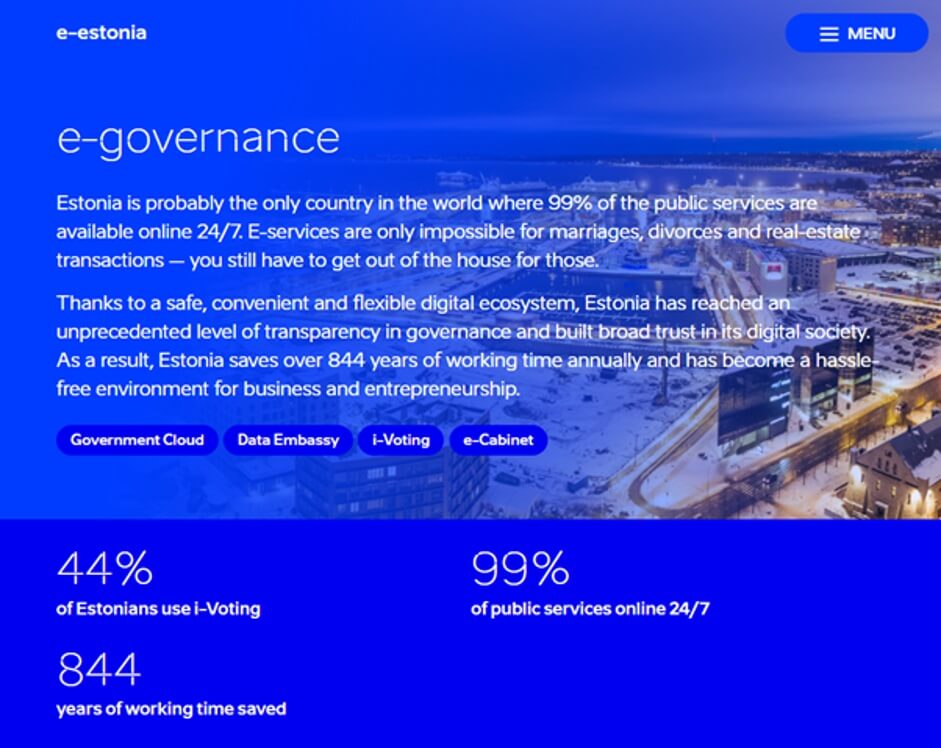 The system was first introduced as a nation-wide pilot project in 2005, using Smartmatic Corporation’s technology. Two years later, Estonia became the first country to employ the blockchain-based system for parliamentary elections, with over 30,000 persons using it. 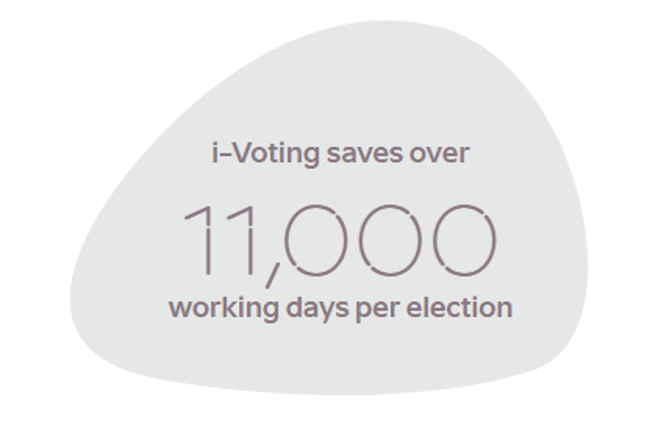 According to the Estonian government, the country’s i-Voting system is “simple, elegant, and secure” – unlike comparable systems elsewhere that engage “costly and problematic machinery.”

The system requires voters to register during a designated pre-election period using their e-identity. Estonians are issued with digital IDs based on their national ID card, mobile phone, transnational digital identity, and Smart-ID cards which act as Qualified Signature Creation Device (QSCD). 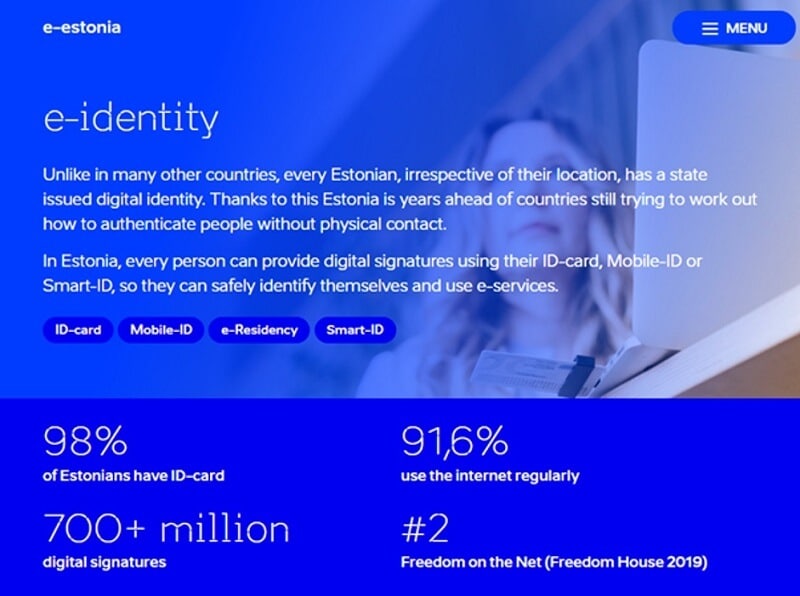 The voter’s identity is then taken out of the voting ballot, thus guaranteeing that when the vote goes to the National Electoral Commission for counting, the identity of the caster remains anonymous. Hence, election integrity is maintained.

Over the last decade, Estonia has successfully used its i-Voting system in eight major elections, with 44.5 percent of the electorate choosing to vote through it.

Waves Introduces a New Version of Its Smart Contract SDK