ADA coin trades with bearish impact as it trades with stability and declining price channel. The decline is not rapid enough to justify it as a definite plunge. However, cumulatively, Cardano is resulting in a downtrend, losing important support levels.

Analyzing the month-long movement of the pair ADA/USD on Kraken, we see that the coin was trading with volatility in the previous month as compared to the current month’s movement. The price of Cardano has been on a stable bearish run forming a narrow trading channel as it records the slow decline. From soaring at $0.0461—a 45-day high, it has hit the lowest of the same timeframe at $0.033. Later, it recorded a rise at $0.042, after which ADA price is on a continual downswing.

The current trading price of Cardano, as observed, is below all the major moving averages i.e., 9-day, 49-day and 100-day, facing indefinite selling pressure.

This bearishness is rightly confirmed by the MACD line that is inclined to zero and has a bearish crossover as the signal line overpowers the MACD line.

The RSI of the coin is at 35.39, showing no extremities at present, but holds an inclination towards the oversold region due to the slow decline that Cardano is facing.

Oranco to Use Blockchain-powered Laser Technology to Fight Counterfeit Products

Ripple (XRP) Price Declines Over a Day by More Than 3%

Cardano Stuck in a Negative Zone; ADA Could Breach Its $2 Support 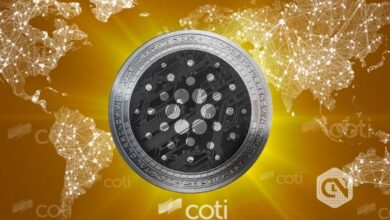 COTI to Be the Official Djed Issuer for Cardano