Cardano is a technological platform that is capable of running financial applications currently used every day by individuals, organizations and even governments globally. This platform is built in two layers, which gives the system the flexibility for easy maintenance. One layer manages the DA exchanges and the second layer is for the smart contracts. The upgrades are done using soft forks. These separate layers help in managing the transaction of ADA coin and smart contracts separately. This ensures the future of money making possibly fast and the transactions secure and also lets the users operate diverse, smart contracts and applications seamlessly. The layered platform is tamper-proof. And once the information is stored, a contract executed or the transaction is performed, the data are restored in the blockchain ledger permanently.

Cardano’s cryptocurrency is denoted by ADA, which is an advanced, efficient combination of Bitcoin and Ethereum. Bitcoin is a financial based platform, and ethereum is completely based on smart contracts blockchain. Hence, Cardano is a step ahead in organizing and facilitating both the blockchain platforms in a better way. This smart contract-based system is used to control Decentralized Applications also known as DApps. 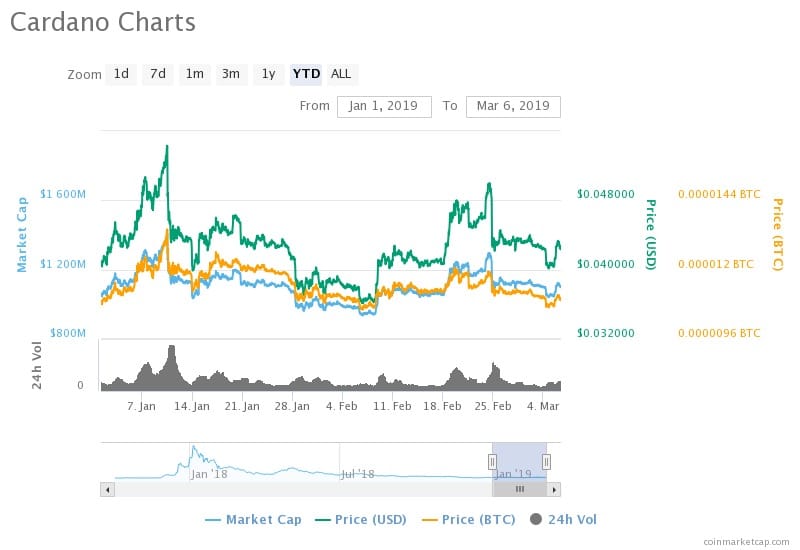 According to the analysis from Coinmarkcap, Cardano (AD8uA) is the 12th largest currency in the crypto market with its MCap value trading at USD 1,103,139,785 for the corresponding 24h volume of $21,323,937 on March 06 at 11:14 UTC. The cryptocurrency’s MCap value crossed one billion USD at the beginning of the year, reaching as high as 1.4 billion USD on January 10. However, the volatility of the digital currency brought down the values, and the market had been downtrend since then reaching its lowest of USD 939,288,944 on February 08 at 07:34 UTC. This value is  17.44 percent lesser than the current value. The market cap value started to increase gradually and reached a peak value of USD 1,293,404,787 compensating the loss during the downtrend. The volatile cryptocurrency did not sustain the increase for long, and hence the values started dropping and have reached the current value. The 20-day moving average exhibits an uptrend with values rising from $1,053,692,105 USD on February 14 to the current value of $1,103,139,785 USD, a 4.70 percentage increase. The bearish pressure on the market considers the percentage difference on the 20-day EMA insignificant.

The price of BTC has been in the same wave pattern with the MCap value of ADA. The values of both have been merging and overlapping each other from time to time. The bitcoin reached its peak prices on January 10 and February 19 with values of 0.0001337 and 0.00001208 respectively. The current price has been comparatively lower in value with a percentage difference of 17.88% and 9.11% respectively.

The 14-day moving average shows the downtrend in the cryptocurrency’s market. The value declined from $1,221,367,812 USD on February 20 at 23:34 to $1,103,139,785 USD (current value) by 9.68 percentile. Since both the averages are not in support of the market’s uptrend, the bearish pressure acts upon, pointing the market balance in favor of the sellers. This means both the long term investment and the short term investments will have to be put on hold. The traders will have to explore the market and observe the trend until there is a stable and significant increase. Investing in this cryptocurrency once there is growth will work advantageously to the investors and the cryptocurrency.