Cardano is an advanced cryptocurrency and a hybrid combination of Bitcoin and Ethereum. It facilitates both the platforms with its two-layered system – one layer manages the DA exchange, and the other layer runs the smart contracts. The main objective of this cryptocurrency to create a sustainable ecosystem using the separated layers to manage the transaction of ADA coin and smart contracts separately. Its primary motive is to provide quick and safe currency exchange and to let the users operate diverse, smart contracts and applications seamlessly. 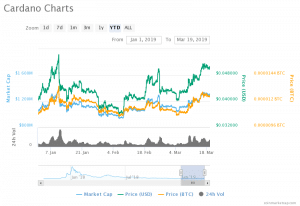 As per analysis from CoinMarketCap, Cardano (ADA) is ranked the 11th largest cryptocurrency and its market cap value is $1,297,892,117 USD for the 24h Volume of $38,203,217 USD on March 19 at 13:14 UTC. This is based on the circulating supply of 25,927,070,538 ADA coins. The current market value is relatively higher compared to its corresponding value on February 12 of USD 1,057,990,288. There has been a 2.68% increase from the past. The volatility of the cryptocurrency shows oscillating values; there have been consequential increase and decrease in the MCap values. However, the 20-day EMA displays an uptrend with the values rising from USD 1,125,327,142S on February 27 to the current value with a growth rate of 6.36%. This inclination in values puts the digital currency on a bullish pressure.

The 14-day moving average shows the values going uphill from USD 1,108,385,436 on March 05 to the current value with a 17.10% increase. Both the averages move in a positive direction with both the values on an uptrend and their percentages show a significant rise to giving the bulls rule an upper hand on the cryptocurrency’s market. The volatility of Cardano is a concern for investors with long term place. Hence, they will have to sideline and explore the trend before investing. However, the market is favorable to the traders. They should take advantage of this levitating market to earn a significant profit from their transactions. Investment from traders will bring stability in the value of the cryptocurrency.