Cardano (ADA) is a blockchain platform which is built on the Haskell programming language. Its decentralized platform allows complex programmable value transfers securely, and the transfer is also scalable. Cardano (ADA) is the first blockchain platform which emerged out of scientific philosophy and a research-first driven approach. It has been developed by a fleet of a global collective of expert engineers and researchers, and now they are on the mission to develop a smart contract platform which would deliver more advanced features than any other platform on the globe.  Cardano aims to be global as it promises a democratic governance system which would fund itself by a visionary treasury system. 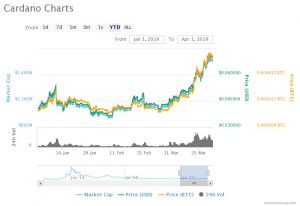 It is evident that the month’s gain has been on the higher side. And experts across the globe have predicted the price to go even higher after a short break in prices. We predict the price to reach 0.08 USD by the end of this month. And in this quarter itself, the price of each coin may reach to 1 USD. Many crypto owners have predicted the market to be ballooned by 10 times. If that happens, Cardano will not be spared from the boom. In the event of a boom, the price of each coin may get as high as 10 USD by the middle of 2020. We advise the holders to wait for at least 18 months to reap the highest dividend and for short term investors, a week may push the price to the previous high.