Cardano is a decentralized; blockchain based layered system that runs on the Cardano platform. The platform is two layered – a separate layer which runs ADA exchange and a separate one which runs the Smart Contracts. The primary focus of this network is to create a sustainable ecosystem which separates transaction of ADA coin and usage of smart contracts along with the improvisation on the shortcomings of Bitcoin and Ethereum. It provides a quick and safe currency exchange and continued usage of smart contracts. The coin ADA is pre-capped at 45 million USD. 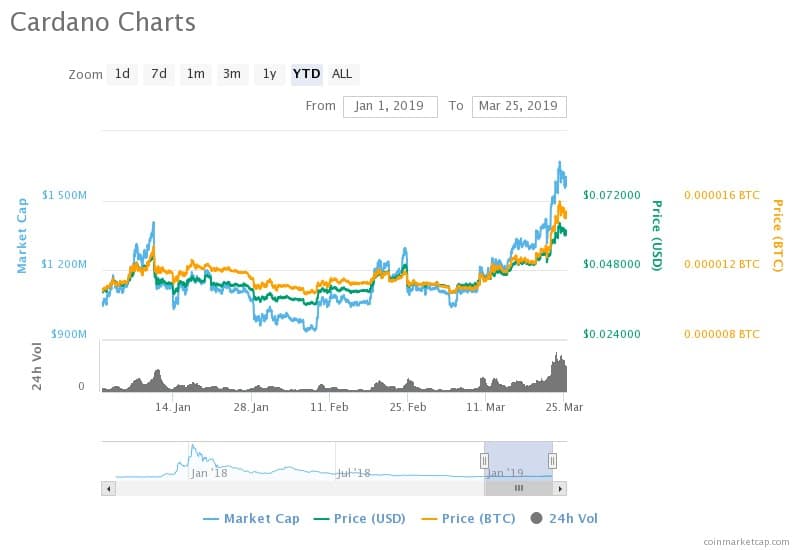 Coinmarketcap estimates the pricing movements of the cryptocurrency, and the current values amount to $0.060416 for the price of USD and 0.00001503 for the price of BTC. The market trend shows that the price of BTC and USD has been merging and overlapping each other while the MCap value runs its course. The price of BTC opened at 0.040984 at the beginning of January and has been gradually moving upwards with minor dips. The lowest was on February 06 with the value of 0.00001062 and the highest on March 24 with the value of 0.00001581. The values are 41.53% and 5.19% higher and lower than the extreme values respectively. Similar to the Bitcoin’s price, the price of USD per ADA has been on a moderate increase, and the growth has been stable. The price of USD shared its peak along with BITCOIN and Cardano’s Mcap values on March 24 with the values of $0.063723. The current value is in short of the peak price by a very minimal difference of 5.47%. However, the cryptocurrency reached its milestone when the price of USD shot up between March 21 and 24 from $0.051639 to $0.063723 by a hike percentage of 23.40% in 03 days.

The significant difference in the increase in prices, the moving averages and the overall market have been under the bulls rule.  This stable market gives an upper hand to the buyers. Hence, the traders and the investors with short term and long term investment plans should headway into this cryptocurrency’s market. The contributions from the traders will further increase the value of Cardano.

Cardano Turns up to be an Intraday Gainer; Trades at $0.121