Cardano is an enhanced efficient combination of Bitcoin and Ethereum, in simple terms, it is a decentralized, blockchain based system, powered by the ADA coin and it runs on the Cardano platform. Cardano is a two-layered system – one layer manages the DA exchange, and the other layer runs the smart contracts. It is also the first peer-to-peer transaction system based on scientifically tested theories. Its primary motive is to provide quick and safe currency exchange and to let the users operate diverse, smart contracts and applications seamlessly. Since the platform is layered, it becomes difficult to tamper it once entered. 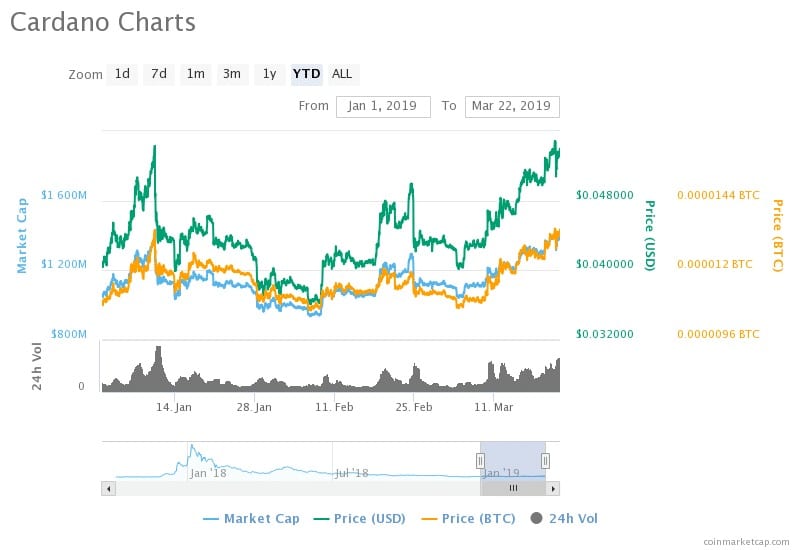 As per analysis from CoinMarketCap, Cardano (ADA) is ranked the 11th largest cryptocurrency and its MCap value is $1,399,244,681 for the 24h Volume of $69,171,882 on March 22 at 12:24 UTC. This is based on the circulating supply of 25,927,070,538 ADA. The current market value is relatively higher compared to its corresponding value on February 22 of $1,164,089,226. There has been a 20.20% increase from the past. The volatility of the cryptocurrency shows oscillating values with inconsequential increase and decrease in the MCap values. The MCap values opened at 1050 million at the beginning of 2019, and faced a downtrend period between January 11 and February 17, with the lowest on February 06. The 20-day EMA displays an uptrend with the values rising from USD 1,107,199,723 on March 02 to the current value with a growth rate of 26.38%. This inclination in values puts the digital currency on a bullish pressure.

Focusing on the price of USD for the digital currency, the current value of this pair is USD 0.053968 at 12:24 UTC. The analysis on the pair shows that the MCap value and the USD have been running parallel to each other from the beginning of January 2019. This cryptocurrency reached its milestone between February 18 and 24, as ADA rallied from a low of USD 0.041063 to a high of USD 0.049978 which is 21.71%, a spectacular return within 06 days. Stats show that the price of USD has exceeded the price of BTC. The current value of BTC as on March 22 is 0.00001341 (12:24 UTC). Stats display the lows and highs of BTC’s price value – the low on February 06 with the value of 0.00001062 and a high on March 21 with 0.00001344. The current value is closer to its highest value with a negligible difference of 0.22% and a significant 26.27% increase from its all-time low. However, the price of BTC has been overlapping the MCap value; the price has been on a gradual increase recently. The MCAP value along with prices of USD and BTC reached the pinnacle on March 21.

The 14-day moving average shows the values going uphill from $1,128,108,875 on March 08 to the current value with a 24.03% hike. Both the averages move in a positive direction with both the values on an uptrend and their percentages show a significant rise too. Hence the bulls rule the cryptocurrency’s market. The market is favorable to the Investors with long term investment plans. Traders also should take advantage of this levitating market to earn a significant profit from their transactions. Investment from traders will increase the value of the cryptocurrency in the future.

Cardano Stuck in a Negative Zone; ADA Could Breach Its $2 Support