The Haskell programming language backs Cardano (ADA) and it is a decentralized blockchain platform allowing complex programmable value transfers with complete security and scalability. It is built by a fleet of researchers and expert engineers with an aim to develop a smart contract platform delivering smart features. It aims to provide a substitute for the major financial system in the globe and the democratic governance system, and visionary treasury system is the major factors of Cardano (ADA). 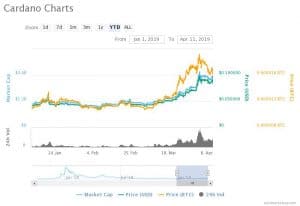 Cardano (ADA) has started this year off with a very low price of 0.04 USD. But, gradually it has been increasing over the period. In these three months, it has risen above 50 %. Like all other major crypto coins, Cardano (ADA) also gained the highest momentum after 1st April. But in the past few days, it has rolled back. The market cap of 11th March was 1,170,782,157 USD. The value of each coin in terms of USD and BTC stood at 0.045157 USD and 0.00001152 BTC respectively. The current value of each coin in USD has inflated by 85 % in the last one month. The current market cap is 85.71 % more than the value of 11th March. It should be noted that the major growth trend started after 21st March and it gained momentum after 1st April. Just before few days of 11th March Cardano (ADA) had touched the lowest point of the year at 0.040236 USD.

After rallying for a month, Cardano (ADA) reached at a price constraint at 0.09 USD. But we predict the price to touch 0.10 USD very soon. The next resistant will be felt at 0.09 USD again, but that would be a shorter one. Long term outlook of Cardano (ADA) is bullish with a target of 0.5 USD by the end of this quarter. Short term outlook makes a perfect time for securing a buying position. The same way medium-term outlook now should aim for 0.10 USD giving the investors above 120 % profit over a month.