Cardano (ADA) is a decentralized, fully open source, public blockchain protocol. This platform allows complete programmable transfers of value in a secure manner. Cardano coin is called ADA cryptocurrency of Cardano. The official wallet that supports ADA is a Daedalus wallet, some third party wallets, and several mobile phone wallets. The contracts will be written in Solidity and Plutus languages. The project aims at giving a neck to neck competition to Ethereum to become a smart contract platform. The smart contract platform seeks to deliver more advanced features by the development team consisting of a large global collection of expert engineers and researchers. Cardano will use democratic governance system that allows the project to evolve over time and fund itself sustainably through a treasury system. 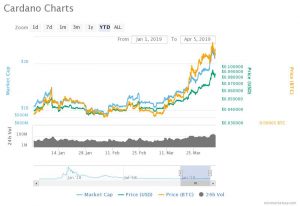 Looking at the graph of Cardano by Coinmarketcap, we see a sanguine market since a fortnight. The price (USD) has been growing at an increasing rate. The highest price (USD) 0.098040 with a market capitalization of 2500 million, since the start of the year, was witnessed yesterday. The second highest of the year from the point since the growing market trend started was on March 24 having a price (USD) 0.064336. The lowest since the start of the year till now was observed on January 29th with a price (USD) 0.037779. Concerned with the least price on January 29, it is 133.34%higher which is remarkable. In comparison with the situation observed ten days back on March 24, it is 37.02% higher today. Therefore, showing a hopeful market scenario for days to come.

The market for Cardano appears to be bullish for a medium-term span. Also, looking at the chart, it is evident that Cardano for a long time had a flattened scale irrespective of the growth shown in last 15 days. If it performs well while the market makes hay, it is likely to rank amongst the top 5 cryptocurrencies in the list.