Cardano is a decentralized open source platform based on scientific philosophy. Ouroboros, a proof-of-stake algorithm has been used to build this blockchain based system. The platform was founded by Charles Hoskinson (co-founder of Ethereum) and had been doing rounds for its faster transactions in a fully secured environment. The team of developers has been involved in extensive research to keep enhancing the features of the platform and have achieved some significant milestones since its inception. It uses the Haskell programming language and dominance governance system to allow continuous evolution over the course of time. 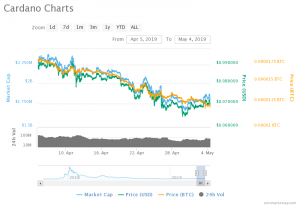 According to the expert traders and investors, this is the best time to invest in Cardano in bulk as the prices will shoot up suddenly in the second half of the year. The strategic partnerships and growing support from communities is an indication that the prediction might come true for the cryptocurrency. Although the world of cryptocurrencies is highly volatile some significant factors have contributed to the success of many coins including Bitcoin. One of them is gaining the trust of the key investors and Cardano team is investing heavily on securing faith from the industry’s who’s who through its scientific approach & introduction of innovative features on a regular basis. The recent announcement of the integration of Cardano’s ADA with Ledger Nano S is regarded as a stepping stone in increasing its mainstream adoption. Cardano has also collaborated with AION in the recent past which can lead to a surge in prices in the coming quarters. From a 2 year perspective, the prices can reach as high as 5 USD, and in five years down the line, if the coin sustains the market volatility, the highest price can peak to over 50 USD.