Wondering about the factors that can push ADA prices to shoot through the roof? A new upgrade known as the Vasil Hard Fork shall improve the network’s scalability and performance. It will be the next advancement on the Cardano as it attempts to make the blockchain scalable and robust. The ADA blockchain has bolstered its infrastructure to improve the network through previous upgrades like the Alonzo hard fork.

Charles Hoskinson, the founder of Cardano, added some hype to the upcoming project by explaining its upcoming Vasil Hard Fork in a series of tweets projected to influence the network’s overall connectivity and stability. The cost of transactions would be decreased by reducing their size and making them more compact and lightweight.

This new upgrade will enable users or developers to store data on-chain, which will be essential to propel Cardano towards a truly decentralized architecture. The launch of the Vasil Hard Fork has been a widely anticipated development in Cardano for 2022.

The Cardano team is trying to fix bugs in the old protocol and bring all these outstanding features. The number of projects in the Cardano chain is expected to increase, followed by skyrocketing transaction volumes.

ADA is still in consolidation after failing to maintain its bullish streak in the first week of June 2022. Currently, sellers are booking profits at the hint of breakout and pulling the prices down. What should be your move with ADA? Read our Cardano prediction to know the answer! 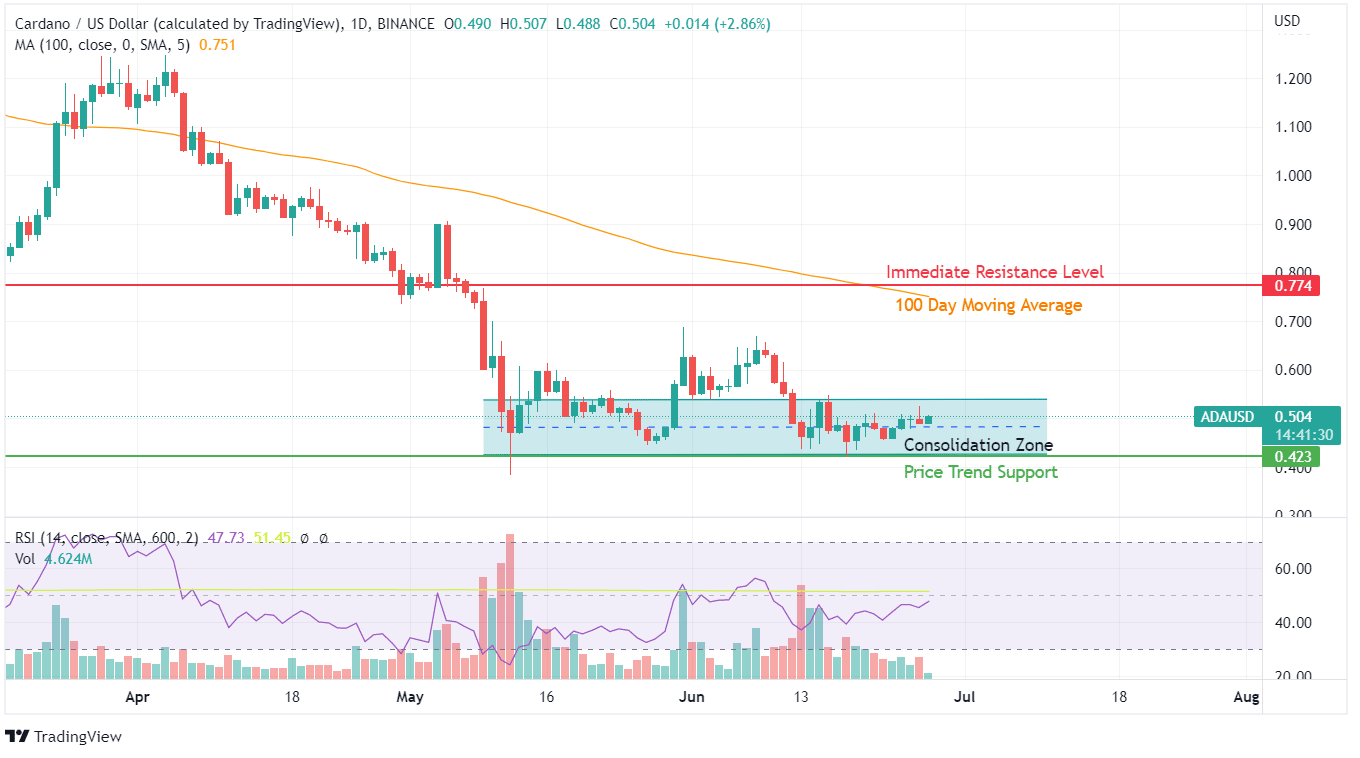 For the second half of June 2022, ADA has shown very low volumes of transactions which could be a setup for an upcoming breakout trend. While RSI during this period has remained constrained in a narrow zone, the probability of breakout remains strong.

Since failing to overcome the $0.70 resistance during the first week of June, ADA hasn’t attempted to retest the levels. Under such scenarios, it would be challenging to realize the complete potential of this cryptocurrency.

100 DMA curve still sits in tandem with the immediate resistance level of $0.774. Psychological support from pushing the prices of Cardano close to previous highs could return in action only after ADA touches the $1 mark.

In terms of the price action of a single day, the volatility has dipped while daily transaction limits in both directions have remained low. In the short term, buyers should remain aware of $0.65, another resistance level for ADA.

Furthermore, overcoming the 100 DMA curve would create the right scenario for another leg of positive buying. The formation of wicks near the upper limit of the current consolidation zone can create a further delay for the required breakout.