Cardano is often referred to as more than a cryptocurrency, and it is the first digital currency to be built from a scientific philosophy. It is the only cryptocurrency designed and developed by a global team of leading engineers and academics. Cardano (ADA) is a decentralized platform that enables complicated programmable transfers value in a very secure and scalable format. It is one of the early blockchains that is built in the Haskell Programming Language. Its developers are currently developing a smart contract platform by adding more features and updates which will be exquisitely innovative than its other protocols which have been developed earlier.

Price analysis of ADA on the basis of Cardano Charts 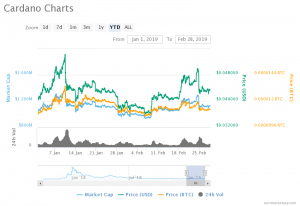 Over the past few months, it has been observed that ADA has been maintaining good stability to a certain extent. Cardano is known as the Ethereum of Japan, and 95% of ADA’s users are Japanese people only. The crypto analysts expect that ADA will be on the rise in this year. Its value will hover around 40 cents mark. Towards the end of the third quarter of 2019, it is expected that the value of ADA can be $0.30 but, again in the last quarter, it can rise to $0.40 mark. After 5 years, the price of Cardano can reach to $2.

Cardano has the aim to be the third generation crypto with the goal to overcome issues that other cryptocurrencies have. From the above price predictions, it is cleared that 2019 will be a good year for ADA as its price range will be on bullish trend mostly, and it can be a very good option for long term investment too.

Cardano is on its way to gain more trust and traction from its users. Investors who are thinking to get good returns from ADA investment, they can proceed at ease, as 2019 is going to be profitable for ADA. They can also consider ADA investment in long term basis as well.

Will It Be Effective To Invest In Huobi Token?