Cardano has held its ground against selling and buying rallies, mostly moving in a long-term consolidation with very small deviations. In the last four months, volatility for ADA has remained strong. Cardano still ranks at the 8th position with a market capitalization of $15,736,494,964, with 76% total circulation volume.

ADA’s failure to create a breakout or breakdown from its consolidation might result in dissuading holders from this token. The outlook for this cryptocurrency remains mildly negative. Check our ADA forecast to know how the future price will move and how you should deal with this token. 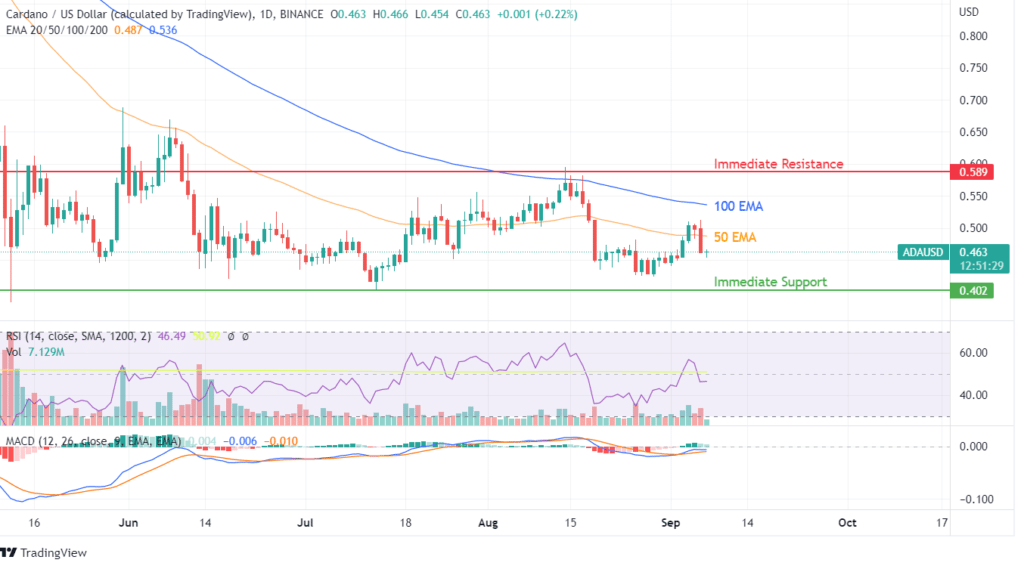 ADA’s price action shows a lack of strong buying sentiment created by dipping transaction volumes. Either more buyers are holding their tokens in expectation of a bull run, or they are shifting to trade with other promising cryptocurrencies offering higher volatility and returns opportunities.

The tanking price action of Cardano after breaching each short-term moving average is nothing less than a negative trend for ADA. The outlook for this token in the short term will continue to be consolidative and negative.

On weekly charts, ADA price action this week has significantly engulfed the gains made in the previous week. This negative trend is trading below its 50 EMA, which might add selling pressure to the existing negative movement.

The support level at $0.402 has maintained its ground even during the July negativity, and a renewed buying rally can be expected from this level. On weekly and monthly candlestick charts, the ADA’s probability indicates consolidative and negative.