Cardano blockchain and its native cryptocurrency ADA was the brainchild of an ex-ETH co-founder, who ventured into this blockchain to overcome the limitations of Ethereum blockchain. Current developments on ADA are not just limited to its protocol development and improvements in translation speeds. ADA has partnered with decentralized exchanges, testing crypto swap test nets, supporting DAPPs, and also working on NFT developments.

Challenges and fear that other blockchains might surpass ADA have created a negative sentiment in investors’ thoughts regarding ADA’s further adoption and potential. ADA currently holds a strong position, which is amongst the top 10 blockchains with a market capitalization of USD 28 billion with a total supply of 35 billion tokens. Hence, in a theoretical setup, ADA securing a market value of $10 can threaten ETH’s market dominance.

Whether or not this potential can be realized is up to the progress and ADA’s adoption. Let’s discuss the price trend, candlestick patterns, and technical indications on the ADA blockchain. The price trend is negative since it touched a fresh all-time high of $3 in September 2021, which spiraled this coin into a profit booking sentiment much like the other crypto tokens. 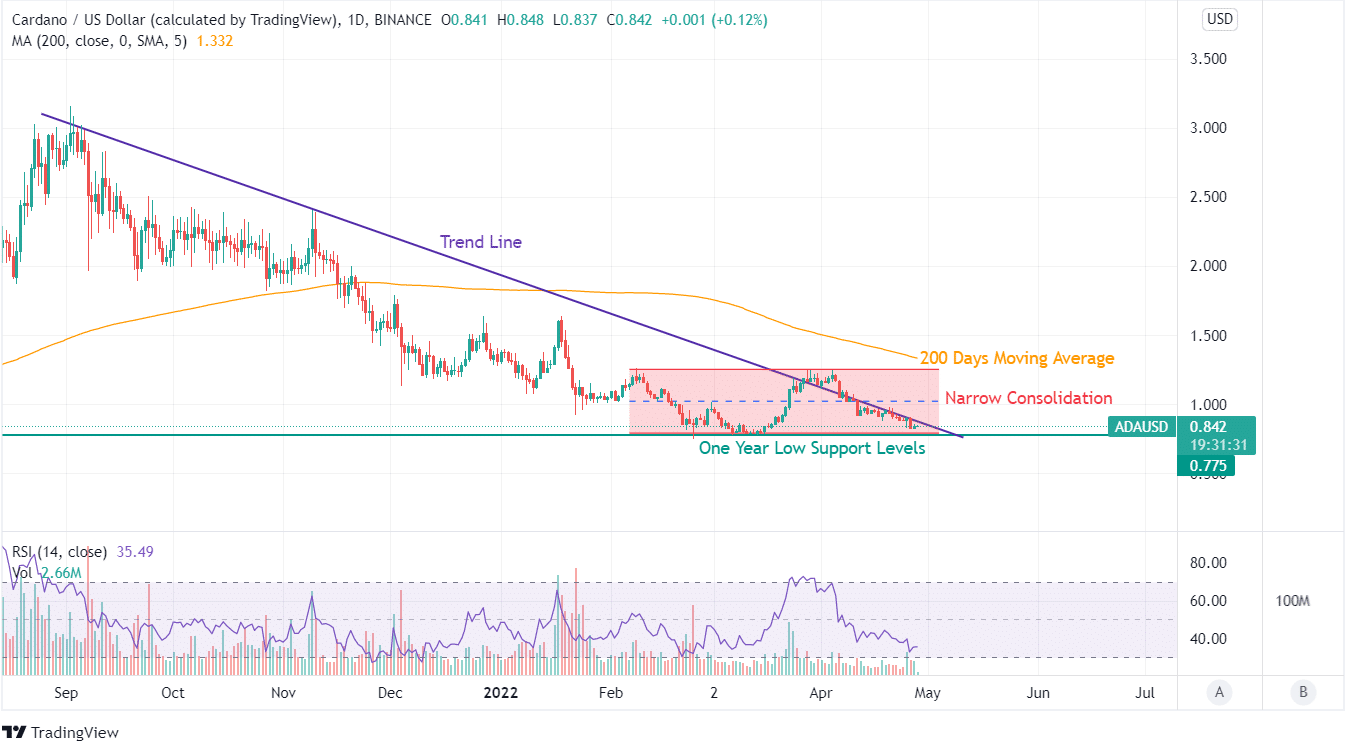 ADA has last chart-wise support at $0.775, which is in tandem with the year low price level. A breach of this level could create an overall negative output for the last 12-month price trend, which would be all the more negative for ADA. The surprising rise of its RSI during April 2022 from 30 to 70 for a 60% rise indicated a less volumetric rise. Hence, ADA was set to decline further.

Currently, the value of ADA is perfect for acquisition based on the ADA coin price prediction, as it can spike to an all-time high with subsequent positive developments or real-life termination of its tokens. The relation between RSI and the currently traded value of ADA should indicate a further decline in value since it would take a few more months for the favorable execution of ADA’s new endeavors.

The rise in the total number of ADA wallets to 1200% indicates a huge potential for ADA to grow in the coming years. Since its 200 DMA curve has declined from $2 levels to $1.4, surpassing this level would be easier for ADA.

Once the 200 DMA level is surpassed, ADA will be able to move towards $2 in the short term. Expecting a higher return from ADA could lead buyers into traps, and one must always match their expectations with the potential of ADA.