Despite losing over 30% of its value from its all-time high of $3.05, Cardano is still holding on to its fourth position amongst the leading cryptocurrencies. This could plainly indicate a decreasing buying sentiment across all cryptocurrencies, except BTC, ETH, and BNB. At present, the market capitalization of ADA is almost $70 billion, with a net circulating supply of 73%.

Cardano has the highest growth prospect in terms of transaction speed and cost of each transaction. It is the leading cryptocurrency using the Proof of stake algorithm of transaction validation. ADA gained global recognition since its launch of the Shelly upgrade, which boasts a much higher decentralization potential. With the latest Alonzo upgrade, users can now use ADA for dApps.

The peak of $3.10 was also hit a few days before Alonzo’s hard fork release. So whether or not the subsequent sell-off has resulted from decreasing efficiency of its blockchain network or not, one cannot be sure of the real reason behind the continued selling pressure on Cardano’s ADA.

The negativity on ADA coin price was predicted through technicals even before the September 07 double-digit profit booking. It has been a problematic one month for Cardano since there have rarely been any retracements. The longer it stays close to its support level, the higher the probability of breaching this level. 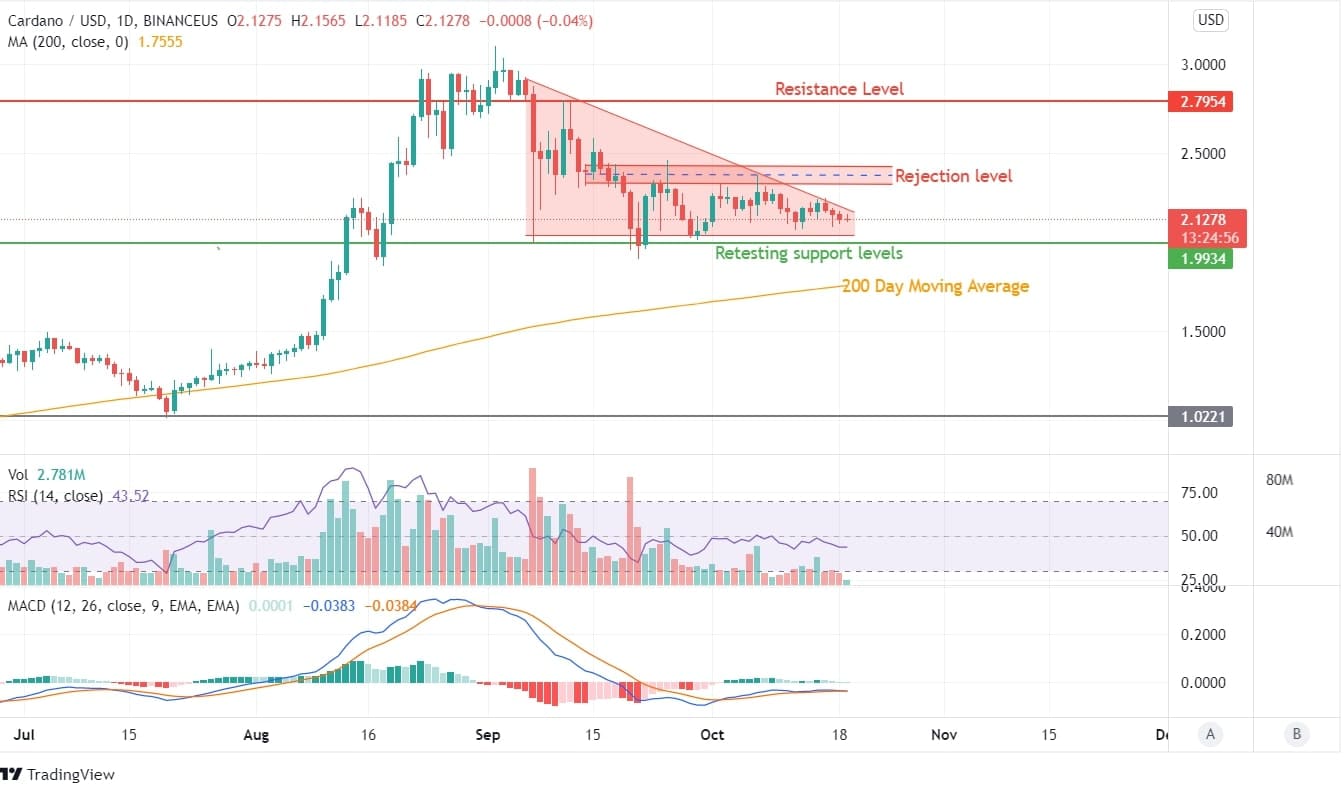 One a single glance, we can consider $2.00 to have become an extreme support level for ADA price action. It has not only been supporting a continued bullish sentiment on this cryptocurrency despite massive sell-offs, but this is also acting as a potent psychological support level. The resistance level can be seen taking a dip towards the $2 support levels. In addition, another critical support level of 200 DMA has taken an enormous jump from under $1 in July to $1.80 in October.

Coming down to the technical indicators, RSI has taken a steady decline from overbought ranges of 75 to the lowered mid-levels of the 40s. Comparing the volumes in August and September 2021 to the recent weeks, the reduction in daily transaction volumes is also apparent.

Could that mean the Alonzo hard fork has failed to deliver the expectations? Well, on technical terminologies, there seems to be a steady decline in valuation, transaction levels, and volatility since September 03, precisely the day Alonzo was supposed to happen. Till MACD turns towards the positive axis, nothing can be mentioned as a positive stance as per our ADA price prediction.

POCOLAND and Chainlink Enter Into a Partnership